Batting superstar Steve Smith has been cleared to return from concussion and is set to step out for the Rajasthan Royals in their opening Indian Premier League clash on Tuesday.

Smith missed Australia's three one-day internationals against England this month, having been hit in the head while taking throw downs in the Manchester nets on the eve of game one. He passed multiple concussion tests but Australian team management took a cautious approach with him, particularly as he looked scratchy in the nets on the eve of game three.

Now in the United Arab Emirates, where he will skipper the Royals, coach Andrew McDonald, who is also Justin Langer's senior assistant coach with the Australian team, declared on Monday night that Smith would take on the Chennai Super Kings, featuring Australians Josh Hazlewood and Shane Watson, in Sharjah. 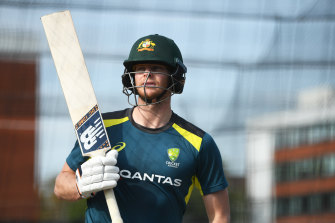 "[It's] fantastic news that Steve is available. It's fantastic, especially on the back of some setbacks back in the UK," McDonald said.

"It's, obviously, great to have your skipper available for the first game. As I've said before, we are in really good hands. In terms of the rest of the squad, we couldn't be happier with their preparation.

"We've got what we needed, having been here nice and early to get our preparation going on the back of the long lay-off. We have got the bases covered and have some really good depth in the squad and really looking forward to seeing what it looks like in a real competitive match against CSK."

Smith was also concussed when felled by a Jofra Archer bouncer in last year's Ashes series and missed the next Test at Leeds.

He said on Monday he had followed all the protocols required to return.

"Yeah, obviously missed the last three one-dayers in England. Been in Dubai for a couple of days now with some good rest and then got into a bit of running," he said.

"Yesterday [Sunday] I did a bit of zig-zag running, which is part of the protocols to pass to get back to play and today [Monday] I'll have a hit in the nets. Hopefully, pull up well from the hit and be good to play tomorrow."

Langer said on Monday that Smith may have returned to the Australian side had the one-day series not been so condensed.

"I think the protocols are really strict and sensible and that's how it should be. No one in the world loves playing cricket and batting more than Steve Smith does," he said.

"When he didn't play the first game, I told him it's very likely that it will rule you out for the whole series because we had to play three games in five or six days.

"We're really hopeful he gets back up and running in the IPL, but we expect him to come back and be ready to play great cricket."

The Royals are desperate to rebound from a poor 2019 campaign where they finished second last but will be without dynamic all-rounder Ben Stokes, who is in New Zealand for personal reasons.