The Sydney Sixers have produced another final flurry to take victory against the Melbourne Renegades in the Gold Coast on Tuesday night with one ball to spare.

Last time the sides met, the Sixers won by 145 runs to set a record for the biggest victory in BBL history.

This time, the Renegades set a respectable target of 169 and looked the likely winners when the Sixers needed 16 off the last over.

That became 16 off five balls when Will Sutherland began the over with a dot ball to Jason Holder, but the West Indian captain scrambled a two off the next and then went 4-4-6 to end the match with a ball and two wickets to spare.

Holder's 33 runs of 18 balls was the perfect ending to the allrounder's three-game stint with the Sixers.

"It's good to finish off on this note," he said. "I'm heading off to the Caribbean . . . I've thoroughly enjoyed BBL cricket and hopefully I'll be back in the future.

"I'm just sorry it's only been three games." 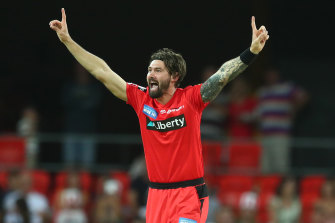 Coming off the back of two of the biggest losses in BBL history this month, the Renegades were desperate to secure their second win of the season.Credit:Getty

An early scare came for the Sixers with the Renegades appealing a near LBW for Josh Philippe off the first delivery of the innings.

The lifeline ignited Philippe and Jack Edwards to form a strong partnership, putting a half-century between them before Philippe managed to hit a stellar five fours in a row.

Peter Hatzoglou took the wicket of Edwards after 21 runs before a failed catch from Kane Richardson gave Philippe his second lucky break of the night.

Finally, Imad was able to push the Renegades back into the game by claiming the huge wicket of Philippe to dismissed the youngster for 48 ahead of the drinks break.

The Renegades were eager to capitalise on the opportunity and dismissed Daniel Hughes for 2. It was a far cry from Hughes' captain's knock last week when he hit 96 off 50 balls.

But Holder managed to steer the ship to the very end to sign off from his time with the club in fashion.

"The positive thing was I kept my wicket intact…so I could give myself a chance," he said.

"I tried to stay calm at the very end…it was my day today, it was good to get another win."