As bets continue to get placed heading into Tuesday's time-honoured race at Flemington, the opportunity for Sir Dragonet to create history dawns more and more on part-owner Brae Sokolski.

Not since Makybe Diva in 2005 has a horse won the Cox Plate and Melbourne Cup in the same year, and before her it was Saintly in 1996 – two immortals in Australian racing. 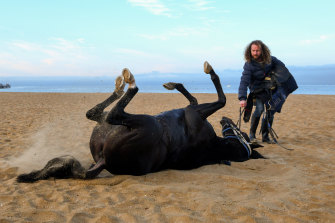 But Sir Dragonet is a different horse to both. Bought by businessman Ozzie Kheir, the son of Camelot blew away his opposition in his Australian debut in last month's Cox Plate. To complete the double at his second Australian start would be an unprecedented feat, not lost on Sokolski.

"It's staggering to think that [could happen]," he said.

"Because he's won the Cox Plate he owes us absolutely nothing, both financially and in terms of the experience he's given us.

"He's established his credentials as a stallion; anything he does from this point forward on the race track is the cherry on top. But he would put himself alongside the greats of the Australian turf if he's able to do the Cox Plate and Melbourne Cup double, as simple as that, the same as Verry Elleegant would do as well." 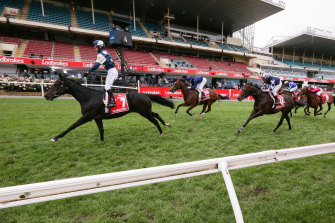 The Caulfield Cup-winning mare is the second of three Cups contenders Sokolski enjoys part-ownership in, the other being Finche.

Verry Elleegant would join the likes of Let's Elope (1991), Doreimus (1995) and Might And Power (1997) to claim the Cups double, which was last achieved 19 years ago by Ethereal, if she could win on Tuesday.

"Everyone has an opinion but mine is that Verry Elleegant is the better of the two chances of all three of my horses," he said.

"That's the great thing about racing, it's subjective and everyone looks at things at different angles.

"We bought [Sir Dragonet] essentially for the Cox Plate but it was always firmly on our agenda to run in the Melbourne Cup; it wasn't an afterthought.

"[But] it's always been about the Caulfield and Melbourne Cups for her this preparation. Ever since we acquired this mare, it's been absolutely our attempt to get to the Melbourne Cup one day and we've always been convinced the longer they go the better she gets.

"Her staying credentials are unparalleled in this country."

Of course, Finche is the smoky that could knock them both off. Sokolski said he'd have no hard feelings if the lightly-raced seven-year-old won him the third race in Melbourne's 2020 spring carnival triple crown.

"I'd be rapt, don't get me wrong. I've got a very strong emotional connection to that horse," he said of Finche.

"He deserves a big race. I'd be just as happy if Finche was to win; I'd like the symmetry of each of those horses winning one of the major races, that would be something special.

"Of course, every single person that has any interest in racing has at some stage dreamt of winning a Melbourne Cup. I'm no different to that and winning other major races has certainly not diminished my desire in any way, shape or form to win the Melbourne Cup.

"It still is the holy grail of racing and it's a public race, it's not an industry race in some regards so it is different. The prospect of winning the 'triple crown' in one season would be a phenomenal achievement."