Trainer Gai Waterhouse has blasted Victorian Premier Daniel Andrews for not allowing a Melbourne Cup crowd at Flemington this year, arguing that people are capable of social distancing and washing their hands to avoid coronavirus.

"It's quite ridiculous really, the way they've gone on in Victoria with the premier there. He should wake up and let people get on with their business. The state will go broke the way he's going," Waterhouse told Sydney radio station 2GB on her way home from Randwick on Tuesday morning. 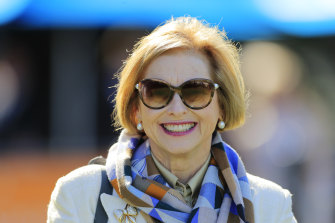 Trainer Gai Waterhouse says crowds should have been allowed to attend the Melbourne Cup carnival.Credit:Getty Images

Asked if she believed Victoria had overreacted to coronavirus, Waterhouse said: "Oh, completely. Completely. COVID's here to last, we may as well start to live with it, otherwise, Australia will go belly-up".

Ms Waterhouse referred to 40,000 people being allowed to attend a football match recently in Sydney, possibly referring to the NRL grand final, in which the Melbourne Storm defeated the Panthers.

"Forty-thousand people walk out, rubbing shoulder-to-shoulder, come on! You get on a bus, you get on anything – people can keep their space," she said.

"They can wear masks if they want to, wash their hands, that's the best thing: wash your hands after you go to the toilet, you won't have COVID."

Chief executive Neil Wilson said the VRC was disappointed but hoped people were enjoying the day from wherever they were watching.

"Of course we are disappointed not to be able to welcome our treasured members, owners, and racing fans to the Lexus Melbourne Cup today, especially when Flemington is looking so spectacular," he said.

"However, we hope that wherever people are watching they are having a wonderful time enjoying the broadcast on Network 10."

Victorian Racing Minister Martin Pakula was forced to backtrack last month in the wake of community backlash, having initially announced that about 500 people would be allowed at Moonee Valley for both the Manikato Stakes and the Cox Plate.

The VRC conceded just days later that it would be impossible to host crowds at the Cup.