Among the claims, it’s suspected Ultra Thoroughbreds used surrogates for champion mare Miss Andretti, as well as Strikeline – the dam of last year’s Australian Horse of the Year, Nature Strip – who were struggling to conceive. Embryo transplantation is forbidden in the racing and breeding industry. 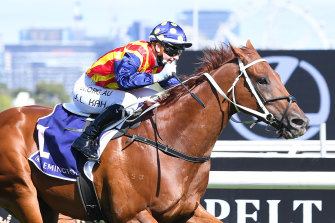 According to a source close to the Racing Victoria investigation, who is not authorised to speak publicly, it’s suspected that at least two foals may have been born this season out of embryo transplantation – a filly out of Miss Andretti and a colt out of Strikeline – which were sired by Ultra Thoroughbreds’ stallion Addictive Nature in late 2019.

The Australian Stud Book, which guides thoroughbred breeding, clearly states a horse produced by any form of artificial breeding is not eligible for the stud book, meaning it is not permitted to race or breed for thoroughbred purposes.

However, the Australian Stud Book says it has not received any paperwork regarding the foals.

Racing Victoria has received photos of the embryos and foals in recent days from a disgruntled former employee, which has triggered its investigation.

"The stewards are in the formative stages of an investigation that relates to thoroughbred breeding," Racing Victoria spokesperson Shaun Kelly said.

"We don't intend to comment on the specifics of that investigation at this time."

While Mr Buckley is the owner of Ultra Thoroughbreds, other employees are responsible for implementing its breeding program. Mr Buckley told The Age he will co-operate with any investigation.

“I have bred over 700 foals in 17 years of breeding. I am well aware of the Australian Stud Book rules. I have always rigorously sought to comply with them,” Mr Buckley said.

“I am aware that a disgruntled employee, against whom I have already commenced Supreme Court action, has made various allegations. The details of those allegations I am at this stage unaware of.

“I have been advised by RVL that they are making enquiries. I intend to fully co-operate with any enquiry as is my duty and responsibility. I have a completely clear conscience.”

Mr Buckley, the multi-millionaire founder of Ultra Tune, is currently involved in legal proceedings in the Supreme Court seeking an order to ban his former partner Jennifer Cole and former employee Anthony Swords from distributing audio recordings between Mr Buckley and Ms Cole.

Nature Strip heads their success stories. The champion sprinter, who on Saturday won his sixth group 1 win to take his career earnings beyond $6 million, was last year crowned the Australian Horse of the Year.

Racing Victoria would not say whether integrity officers have inspected the Kilmore property since learning of the claims.

Ultra Thoroughbreds' success stories include the career of Australia's champion racehorse of 2007, Miss Andretti, and the Cox Plate win of Shamus Award in 2013.

In 2014, they purchased a stud farm in the Hunter Valley, NSW, now known as Golden Grove Stud, where they bred Nature Strip, however most of the stud farm's mares were brought back to Melbourne in late 2018 when they purchased another 120-acre property adjoining Mr Buckley's Barree Stud.

Racing NSW chairman of stewards Marc Van Gestel told The Age he had not received any complaints about Ultra Thoroughbreds.

If the foals in question were bred naturally, they would be worth a significant amount as yearlings due to their pedigrees.

But the value of any horse found to have been artificially bred is virtually nothing in the racing industry.