The Melbourne Cricket Ground has stepped up its bid to go green by turning to solar power.

Having signed on to the United Nations Sports for Climate Change Action framework last year, ground operator Melbourne Cricket Club felt there was more it could do to promote greater environmental responsibility and reduce overall climate impact.

The MCG had already taken action by introducing the Yarra Park water recycling facility in 2012 and, more recently, updating its lighting. But the chance to utilise its significant roof space was a tantalising prospect. 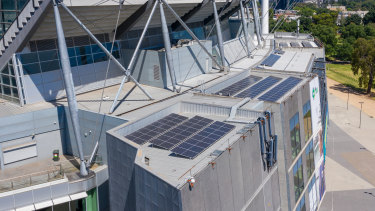 Solar panels have been installed on the outside of the MCG.

The venue's operations team can track energy usage in real time, meaning it will be able to check on what is being generated by the solar panels, thereby managing the load during peak times.

The MCC also revealed it had formed a working party with fellow signatories Richmond Football Club and Tennis Australia – each based around the MCG – to help forge a more united stand. On a world scale, the NBA, International Olympic Committee, the New York Yankees and FIFA are also among the climate-action signatories. 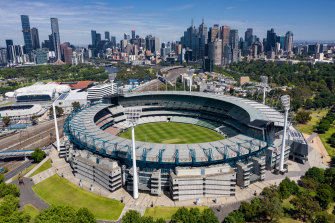 The MCG will be able to monitor energy use in real time.

Wearne has taken great pride in the venue's environmental shift, including reducing electricity consumption by 30 per cent in part through swapping 25,000 light globes to LED fittings. Single-use plastics are being phased out and food waste is dehydrated and turned into soil food for Yarra Park.

This latest development comes as the replacement of flammable cladding dotted across the venue is set to begin early next year and finish in time for the start of the 2021 AFL home-and-away season. The Victorian Building Authority deemed the MCG safe after inspecting it in 2017.

"The MCG has high-level safety measures in place with 24/7 security, smoking bans, permanent sprinkler systems, fire safety plans and numerous access and exit points which is why the stadium continues to be safe for occupancy," a MCC spokeswoman said.