Australian cricketers will think twice about handing their phones over to integrity investigators until Cricket Australia tightens protocols around the protection of anonymous tips.

Regular conversations during the Boxing Day Test match between CA’s chief executive Nick Hockley and his opposite number at the Australian Cricketers Association, Todd Greenberg, will depart from the usual pleasantries to an update about the issues raised by The Age and The Sydney Morning Herald in a story revealing leaked audio about a prominent player’s off-field behaviour. 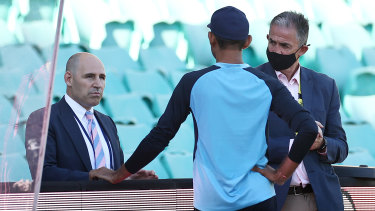 “Right off the top off my head, I can think of a couple of instances where players have willingly handed over their phones as part of an investigation. This, of course, is done with the reasonable expectation that this information remains confidential and secured.”

Players handed over their phones in a pair of recent high-profile instances while integrity matters were investigated.

In 2018, former captain Tim Paine’s phone was searched following revelations of inappropriate text exchanges he had with a Cricket Tasmania staffer the previous year. The investigation cleared Paine of wrongdoing, although the former staffer did not participate in the process and subsequently complained to CA.

In 2019, Hobart Hurricanes wicketkeeper Emily Smith also turned in her handset after she posted a batting line-up written on a whiteboard to Instagram an hour before the team was meant to be formally released. Smith was banned for three months, with an additional nine months suspended.

CA set up an independent integrity unit within the governing body in 2013, following a review of its codes and practices by former AFL executive Adrian Anderson. The unit was initially headed by Iain Roy until the former head of security Sean Carroll took over in 2018.

The unit is meant to operate independently and securely apart from the oversight of a select few senior staff, namely Hockley and CA’s head of legal Christine Harman. In normal circumstances, the leaked audio should only have been accessible to Hockley, Harman, and the integrity unit’s two current officers: Rebecca Murray and Jacqui Partridge.

The integrity unit’s office is located within CA headquarters but is secure from outside visitors. The equivalent anti-corruption and security unit at the International Cricket Council in Dubai has a separate, accredited space in which to carry out its work.

Hockley said the matter was being dealt with in concert with Victoria Police.

“Any stealing of confidential information is a crime. So we have reported [it] and are getting assistance from Victoria Police,” Hockely said on Sunday.

“Clearly it’s really important that people are able to make contact with our integrity line in full confidence that that’s all going to be secure.

“Certainly our processes, we review them very regularly, to ensure they’re absolutely best practice. We have reported that matter to the Victoria Police.”