It is probably heresy for an Australian of Indian heritage to admit this but, having watched cricket in England, South Africa, India, New Zealand and Australia, my most memorable tour as a “nuffy” was Pakistan 15 years ago.

From a fan’s perspective, the three-week, three-Test tour was undoubtedly the best. By a long way. The country and people are extremely hospitable, the wickets excellent, the hotels plush, the food fantastic and, believe it or not, wine and beer are not scarce.

And, of course, the cricket is of the highest standard. After all, this is the country that produced the Sultan of Swing, Wasim Akram, and a chap who used to cartwheel stumps or crush toes – Waqar Younis. And Babar Azam is a batsman in the same exalted league as Kohli, Smith, Root and Williamson.

Not for one moment did I feel in physical danger. Nor did anyone from the 2006 Indian touring team coached by Greg Chappell, which included legends Sachin Tendulkar, Rahul Dravid, Anil Kumble and Virender Sehwag.

It is heart-breaking that international (mainly “Western bloc” – aka white) teams refuse to tour Pakistan on obtuse security grounds, but to dress it up inscrutably and coyly as “credible security threats” is disingenuous. What is at play here? There are definitely double standards. I remind you that Australia did not miss a beat during their 2005 Ashes tour, despite multiple bomb blasts in London just three days before the ODIs.

Former team manager of Australia Steve Bernard says he loved the three visits of Pakistan he went on (a full tour and a couple of “reccy” trips) and would still be prepared to go, but understood why some cricketers might hesitate. 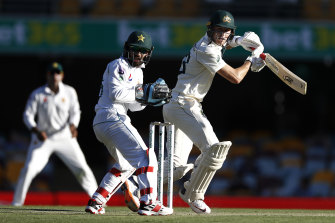 Marnus Labuschagne during Pakistan’s last tour of Australia in 2019.Credit:Getty

Chappell said he had a dozen conversations with then foreign minister Andrew Peacock before Australia’s 1980 visit. There was some trepidation, but the tour went off well and he has always had a great fondness for the country and its people. He does not want to see Pakistan drop off as a cricketing power and feels it should be supported to the hilt by all cricket boards.

And that is precisely why the ICC and its constituents need to try harder. It is neither fair nor good enough for Pakistan to have to host “home” Test matches in anodyne Dubai. The people and cricketers of Pakistan deserve better. Much better. It begs the questions whether the message is that white lives matter more than others because non-white teams (West Indies, South Africa, Bangladesh, Zimbabwe and Sri Lanka) are definitely not reluctant tourists of Pakistan.

Ramiz Raja, the new chairman of the Pakistan Cricket Board, is generally a placid bloke, despite his “Rambo” nickname. He was all fired up when he said to me, “It’s time to stop using the Asian teams and Pakistan to get your work done and binning them when it doesn’t interest you. Richer by experience. We will not allow that to happen any more!”

Teams like England cannot cry off without a good reason. Security worries are just an excuse. Has cricket reached a stage where any old nutcase can phone in and threaten a future international tour? Will such threats be taken seriously? What if such an incident occurred in another cricketing country?

In England’s case, there wasn’t even the fig leaf of a security excuse. Extraordinarily, the British government denied it advised the team not to go. What an outrage. The England and Wales Cricket Board must be afflicted with a collective amnesia in addition to chronic hypocrisy. Pakistan toured England at the height of COVID-19 in the last northern hemisphere summer, before vaccines were invented. They went through all the oppressive lockdown and bio-bubble rules. What a disgraceful way to pay them back!

It is so important to maintain the integrity of Test cricket, now more than ever. And Pakistan are among the nations that need to be supported most. There needs to be a financial support package, and a penalty for teams unwilling to play in Pakistan. Whether it is because their government mandates it politically (as is the case with India), or it is a decision arrived at with the input of their government’s intelligence agencies (the same ones who notified us of Iraq’s WMDs).

Like England, Australia also has a particularly egregious record of pulling out of tours over the past 25 years. Reliably the first to sign up to fight futile wars with America in distant lands, but undoubtedly the Chicken Littles of cricket. I hope this reliable withdrawal record is not adhered to when it is our turn to tour in February/March next year.

You bet, I will be there.

Darshak Mehta is chairman of The Chappell Foundation. A businessman, investor and philanthropist, he was an informal advisor to the Australian cricket team on three tours of India.