Australia have one more white-ball game for key players to find some form and fitness heading into next week’s first Test against Sri Lanka after the one-day series loss on Thursday morning left more questions than answers.

With Sri Lanka having the top three run-scorers in the one-day series and five of the six leading wicket-takers, all spinners enjoying helpful conditions, Australia will face some serious challenges when the first of two Tests, both to be played in spin-friendly Galle, begins next Wednesday. 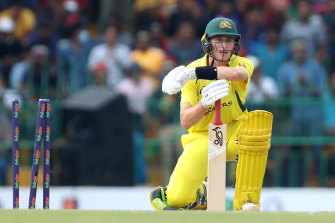 Marnus Labuschagne has struggled during the one-day series.Credit:Getty Images

Steve Smith and Mitchell Starc are in cotton wool because of injuries, Nathan Lyon’s spin partner remains a mystery and Marnus Labuschagne is short of runs.

Sri Lanka claimed Wednesday morning’s one-day match by four runs in a nail-biting finish to go 3-1 up in the series, with Friday night’s game remaining, after Australia failed to chase down Sri Lanka’s 258 all out from 49 overs.

Once again it was Sri Lanka’s multitude of spinners who did the damage, bowling Australia out for 254 off the last ball after David Warner attempted to hold the innings together with 99. The next top scorer was Travis Head with 27.

Warner saw the sunny side of another loss, believing the made-to-order pitches will be ideal preparation for the Test matches.

“We actually love that they’re playing on the wickets back-to-back, that’s what we want, we can’t get that practice in the nets because the nets are green.

“For us, it’s great practice out in the middle with these dust bowls. It’s going to be exciting for the Test matches in Galle because we know what we’re going to get there.”

Warner is Australia’s leading run-scorer in the one-day series with 145 runs, one ahead of Glenn Maxwell. 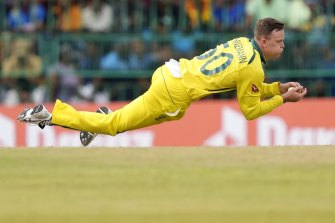 Labuschagne, Australia’s usual Test No.3, has 85 runs with a top score of 29 and an average of 21, but at least he has managed to play all four matches.

Smith has missed the past two games because of a minor quad strain and Starc hasn’t played since slicing his left index finger on a boot spike in his follow through during the opening match of the tour, a Twenty20 game.

Head and Cameron Green at least made centuries for Australia A against Sri Lanka A earlier in their tour.

Leg-spinner Mitch Swepson is fit but has played only one game on tour, the second one-day match, claiming 1-58 from his 10 overs as Australia lost after keeping Sri Lanka to 9/220. 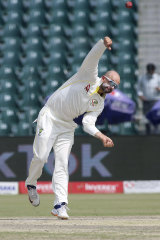 Nathan Lyon will not play a lead-up match ahead of the first Test.Credit:AP

Australia had included Ashton Agar in the Test squad to give them the option of a left-arm spinner, but he has a side strain, with veteran left armer Jon Holland flown in from a Melbourne winter as cover. Holland claimed 0-91 from 19 overs for Australia A against Sri Lanka A in a four-day match which began on Tuesday.

Flown into Sri Lanka during 2016 as an injury replacement for Steve O’Keefe, Holland claims five wickets in two Tests at an average of 55.

Veteran Test-only players Lyon and Usman Khawaja are not playing the Australia A match, instead opting for a week of intense training.

After Pat Cummins (six wickets), who is equal leading wicket-taker in the one-day series with six in three games at an average of 20, Australia’s next most successful bowlers are inexperienced Australia A fly-in Matt Kuhnemann and Maxwell, with four wickets apiece. Significantly, both are spinners.

It would be remarkable if Kuhnemann, 25, was called into the Test team after 11 first class games, which have netted 31 wickets at an average of 34.

But not as remarkable as Nathan Lyon’s debut in Galle 11 years ago at the age of 23 after just a handful of first class games. Lyon claimed 5-34.