As many as 15 Australian players have been offered contracts worth up to $700,000 a year to abandon the Big Bash League and play in the UAE Twenty20 tournament in January.

The scale of the attempted raid on Australian players, revealed to The Age and The Sydney Morning Herald by senior cricket sources, goes far beyond the threat of losing one player – David Warner – to the UAE because he does not have a BBL deal.

UAE contract sizes so far above and beyond what has been on offer in the BBL have placed Cricket Australia and the Australian Cricketers Association under pressure to reassure players that they are not being left behind the rest of the world by remaining loyal to the game in this country. 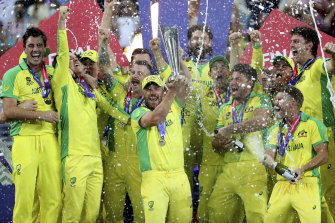 As many as 15 Australian players have been offered big money contracts to abandon the BBL for the UAE.Credit:AP

Chris Lynn, who lost his lucrative deal with the Brisbane Heat, is eager to sign on with the UAE league, but is also weighing up reaching terms with the Adelaide Strikers. Signing a BBL deal would make it contractually difficult for Lynn to also play in the UAE.

While CA is in talks with Warner about finding a way to get him back into the BBL this summer, the governing body’s chief executive Nick Hockley and his player union counterpart Todd Greenberg have been fielding countless calls from players about the offers.

Greenberg said he had been talking to players about the need for the group to take part in the BBL this summer, in some cases on inferior money to the market rates being offered elsewhere, in order to secure the best possible pay deal with CA when the current memorandum of understanding expires next year, and a richer cut of the next broadcast agreement to be signed in 2024.

“I’ve been really heartened by the maturity of the players in response, because after a discussion and communication and a bit more context, they’re not just thinking about the short-term,” Greenberg told The Age and The Sydney Morning Herald.

“They do have this genuine sense of care about the game – if they didn’t, they would be mercenaries and take what’s in front of them. But they’re not, they’re actually taking a mature, considered approach to this and trying to be part of the solution. This comes down to establishing trust with your own players and the relationships you develop with them.

“Sometimes when you work closely with players, you’ve got to tell them what they need to hear, not what they want to hear. We’re not in the business of being sycophants – occasionally you need to square them up, talk to them as adults, and give them proper information and let them make some informed decisions with a long-term focus.”

While expressing confidence that every Australian player would take part in the BBL this summer in one form or another – pending the fitness of the fast bowlers in particular – Greenberg acknowledged that a one-off CA deal with Warner would require some other players to be patient about what lay ahead.

“I do know CA have to stay within the salary cap principles for any player and that includes Dave,” Greenberg said. “But clearly they’ve got to try to make the best offer they can to keep him here. It’s a balance of trying to make sure you’re attracting your best players and there’s some equity in the system and the model, so that all of them have the opportunity to play and are remunerated accordingly.

“We understand and appreciate the difficulties in this particular season coming, which is why we’ve worked hard and in partnership with CA to support the concept of an international draft. It’s not perfect, it’s an inexact science. We hope it will attract the best international players, but we have to try something and we’re prepared to try everything in order to grow the BBL both short-term and long-term.”

As for the wider challenge of Twenty20 leagues – in particular the UAE league’s current regulations that would allow teams to field nine overseas players with just two local players – Greenberg said the issue was only going to get bigger.

“The cricket ecosystem is under increasing stress and pressure and will continue to be so with the advent of new leagues all over the world,” he said. “This is the big difference between cricket and some of our more domestic sports like the NRL and the AFL who are primarily local sports playing with local challenges and local financial opportunities, as opposed to global cricketers like our players, who have multiple choice and opportunities all over the world to play.

“That’s the big challenge confronting the game, players being offered significant commercial opportunities abroad while players still want to play centrally for their country. This is an issue that’s not going away, which is why we’ve got to work together and grow the revenue for the sport, so we can be competitive.”