Melbourne Stars and Perth Scorchers were left to share the BBL points in Launceston on Wednesday night after rain, which initially raised hopes of a shortened run chase for the Stars, eventually snuffed out the entire match.

After an entertaining first innings where Perth accumulated 6-158 from 17 overs as Melbourne negotiated the absence of leggie Adam Zampa, a long delay caused by persistent rain in the Apple Isle and some hasty calculations left the Stars with a total of 76 to chase from six overs. 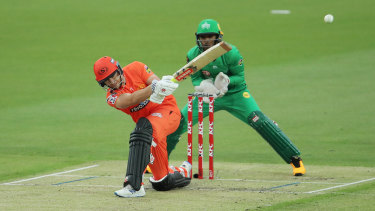 Joe Clarke of the Scorchers bats against the Melbourne Stars before rain ended the match.Credit:Getty Images

Openers Andre Fletcher and Marcus Stoinis got the chase off to the right tone with 10 runs from the solitary Joel Paris over. First ball of the second over from Jhye Richardson, however, caught Stoinis unawares and he was out LBW for four, doing little for this average.

That dismissal was met with more rain, growing steadily, before the umpires reconvened and decided that attempts to finish the match and achieve a result were futile. 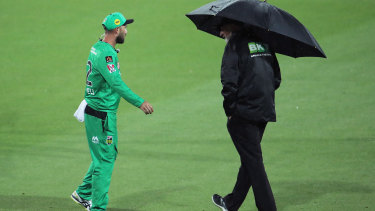 Stars captain Glenn Maxwell speaks to an umpire after play was suspended due to rain. The match was eventually abandoned.Credit:Getty Images

Melbourne managed 1-10 in reply to Perth's total, which could have edged towards 200 had it gone the distance.

For Stars captain Glenn Maxwell, juggling his bowling line-up during Perth's innings was a delicate exercise. Paceman Billy Stanlake and Nathan Coulter-Nile opened proceedings and kept the Scorchers in check at 1-25 after four overs.

Then Maxwell himself ensured a modest run-rate by introducing spin in the next over. But Tom O'Connell (who went for 15 runs from his solitary over) and Clint Hinchliffe (who conceded 17 runs from his single over) suddenly left Perth at 1-63 and the momentum to build a strong total. 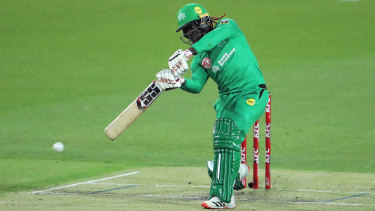 In the end Maxwell turned to eight bowlers but it was arguably the most surprising name with ball in hand, Nic Maddinson, who had the sharpest impact. Wickets in consecutive Maddinson overs in the latter stages of Perth's innings curtailed the Scorchers. Maddinson finished with 2-8 from two overs in a delightful cameo.

Another quick with impact was Liam Hatcher. He came on in the eighth over and immediately removed No.3 Joe Clarke, who was threatening with 34 off 16 balls. Next ball Mitch Marsh went for a golden duck. While the hat-trick ball was disappointing, Hatcher's three overs (conceding 17 runs) were telling.

In recognition of the unusual nature of the lead-up to and start of #BBL10, the Stars granted Zampa some leave. He was one of two changes to the Stars' line-up. After having months away from home living in a bio-secure environment, the Australian leggie will return for Melbourne against Sydney Sixers on Boxing Day.

Dilbar Hussain was the other omission for the Stars after sustaining a moderate hamstring strain against Sydney Thunder. The Pakistan quick will be sidelined for up to six weeks.