Picking The Age and the Herald’s inaugural women’s World Team of the Year has not been an easy exercise. Ideally, we would be naming a Test XI but, with only four games and three countries having donned the creams this year, we have settled on a white-ball team.

While performances in the international arena in all formats take priority, consideration has been given to form in the WBBL, the world’s best Twenty20 competition. Excellence in this domestic league on its own, though, was not enough to warrant selection. Players must also be playing for their country.

This team has been picked to play in 50-over and 20-over formats, which explains Ellyse Perry’s omission despite her deeds in the baggy green. It’s unfortunate for Perry that there are not more Tests in the women’s game, because she would be the first picked in the longer form.

Just two players from Australia – the world’s dominant team – featured in the side, due in part to the absence of Megan Schutt and Jess Jonassen from the start of the season.

And there was no room for Australia’s other two household names in the women’s game – skipper Meg Lanning and Alyssa Healy – the latter paying the price for poor T20 form for country and club. Both will no doubt put egg on this selector’s face in the Ashes and World Cup.

The South African could not be ignored after a stunning year for her country in the 50-over arena, although she was not quite as dynamic in the T20s. Dominant in the ODI series against India and the West Indies, she will be a prized wicket in the World Cup in New Zealand. 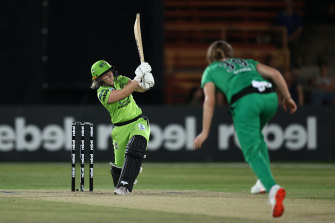 Tammy Beaumont hits out for the Thunder in WBBl.Credit:Ryan Pierse/Getty Images

The England wicketkeeper/batter had a 2021 to remember, finishing second in the ODI runs list behind Lee, her opening partner in this side. Dominant at the start of the year in the ODI series in New Zealand, her form tailed off in the middle of the year back home, but she signed off with a ton. Also prolific in T20s. She takes the gloves.

Having excelled in both white-ball formats, the Australia star was straight onto the whiteboard in this side. The question was where to slot her into the line-up given she opens in the T20s and bats in the middle order for the 50-over format. In order to fit in Lizelle Lee and Tammy Beaumont, we have her in at No.3.

The English all-rounder excelled in T20s for her country, finishing the year third for most runs and wickets. She was also influential in the longer white-ball format, scoring runs at home and away, her best performance coming in Dunedin with a double of 63 and 3-26. 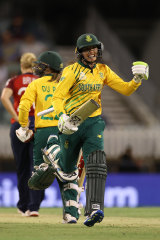 The former South Africa skipper showcased her skill in the series against India, where she batted for time in one victory and used her power in another. Her T20 form was patchy, but an excellent campaign in the WBBL for the Hobart Hurricanes booked her a ticket into our side.

The England power hitter is one of those players you love to have in teams like this. In ODIs, Wyatt can clear the pickets in the happy hour, and she is versatile enough to bat higher up the order in T20s. We’ve got her lower down the order for this side.

The sample size is small for this all-rounder but anyone who watched her slay India at the start of the international season will understand why she’s in. Seizing her opportunity in Ellyse Perry’s absence, McGrath’s heroics in Mackay extended Australia’s streak to 26. Continued her excellent form in the WBBL. 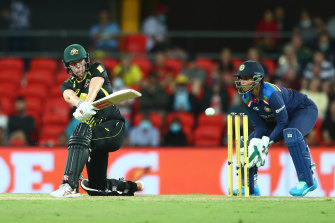 With Jess Jonassen unavailable for the start of the Australian season, the Windies off-spinner was the obvious replacement as a slow bowler who can also contribute with the bat. Matthews’ highlight was an unbeaten century and 2-30 in the opening game against Pakistan, and she was also strong with the ball in T20s.

The veteran is England’s warrior and, at the age of 36, can still play some mighty cricket. The seamer almost single-handedly defeated New Zealand in one game, making an unbeaten 49 to go with four wickets. England will be hoping she can maintain that form for the Ashes/World Cup double in the early months of this year.

Was there a more consistent player across all formats than the England spinner? She claimed eight wickets in England’s draw against India in Bristol and was a handful as well in the white-ball formats, finishing the year fifth and first in the ODI and T20 bowling rankings.

One of the world’s fastest bowlers, Ismail can be devastating when she gets it right, as seen in her five-wicket bag against Pakistan in Durban. She may not have played against the strongest opposition, but we are not holding this against her. We love speed. Hopefully, she will be back in the WBBL next season.