The players and support staff who staged a mutiny against Justin Langer four months ago will have an input into the coach’s reappointment.

Langer’s boss, Cricket Australia’s head of high performance Ben Oliver, confirmed there would be wide consultation before any decision was made on whether the coach’s contract would be renewed when it expires in June.

“We always seek feedback from players and staff,” Oliver said. “We’re about trying to get better. And that goes for our coaching staff. It goes through our players and everyone who’s around the team.

“So we’ll do that as a matter of course, after the [Ashes] series is completed, and the players’ feedback on a range of factors, including how we best support them, will be considered in that process.”

Oliver would not say who would make the final decision, whether it would be CEO Nick Hockley or the CA board, or why it took a revolt of players and support staff in August, more than three years into Langer’s tenure, for a major change to the coaching structure. 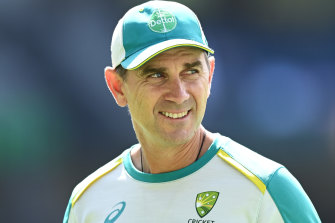 Justin Langer has had to become less hands-on in his role as Australian men’s team head coach.Credit:Getty

“Justin embraced those conversations and ultimately, we’ve created, and he’s helped create, along with the other support staff and the player leaders an environment where the team has been able to perform incredibly well.

“And enjoy a World Cup campaign and enjoy an Ashes series and hopefully that’s also brought some joy to all of the Australians around the country.”

The players were further angered when Cricket Australia issued a statement before the meeting backing Langer, with Eddings desperate to keep Western Australia’s vote, so he could remain chairman. The ploy failed when WA voted with NSW and Queensland to ditch Eddings.

With CA unmoved after failing to act on the players’ long-running concerns about the coach, Paine, Finch and Cummins then each confronted Langer individually.

This forced Langer to take a back seat, leaving the senior players with more autonomy and the day-to-day coaching to assistants Andrew McDonald, Michael Di Venuto and Jeff Vaughan.

Now Test captain, Cummins was non-committal about Langer’s future after the third Test in Melbourne.

“I don’t think today is the day to speculate on that. We’ll all sit down together after this series or whenever his tenure is up. His contract is up for renewal in a few months, and we’ll deal with that then.”

Oliver reiterated that conversations about Langer’s future would start once the Ashes had finished in mid-January.

Australia have a busy schedule, with white-ball series against New Zealand and Sri Lanka in February followed by a tour of Pakistan in March that clashes with a Twenty20 tour of New Zealand.

“We haven’t set a specific timeline on that [Langer’s contract negotiations], we’ll work through the conversations and manage that as we need to. The international cricket schedule is ongoing,” he said.

Despite an increasingly hectic schedule complicated further by COVID-19, Oliver played down the likelihood of splitting the roles with separate Test and white-ball or Twenty20 head coaches.

“Our approach has been to create a team of staff that sit around the players and support them, with that group bringing a set of complementary skills and experiences that support the players across all three formats,” he said.

“The international cricket schedule is demanding. There’s no doubt about that. But certainly, our approach has been a sort of collective team approach in terms of the support that we provide the players.”

Oliver expects the Pakistan tour to go ahead at this stage, despite security concerns and rising COVID-19 cases with the Omicron strain.

“We had a really constructive pre-tour visit to Pakistan, we were able to observe the recent West Indies tour there, that was positive,” he said.

“We’re working through with the PCB [Pakistan Cricket Board] our final assessment and preparation for that tour.”