Australian white-ball stars Adam Zampa and Kane Richardson are on their way home from India to escape the country’s disastrous COVID-19 situation.

Royal Challengers Bangalore, the Indian Premier League club for which both bowlers play, announced on Monday that the pair were heading back to Australia “for personal reasons”. 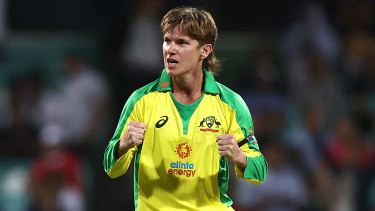 They join fellow Aussie Andrew Tye, who officially opted out of the IPL on Sunday. He had been contracted to the Rajasthan Royals.

An abundance of other top-line Australian white-ball players including Glenn Maxwell, Pat Cummins, Steve Smith and David Warner are also in India playing in the tournament.

Cricket Australia has no immediate plans, however, to organise a chartered flight out of India for players and staff who are there on their own time. The governing body issued a joint statement with the Australian player union on Monday.

“I was doing the calculations earlier and I think I’ve had 11 days at home out of bubbles and hubs since August.”

“Cricket Australia and the Australian Cricketers’ Association remain in regular contact with Australian players, coaches and commentators taking part in the Indian Premier League, which is being conducted under strict biosecurity protocols,” CA and the ACA said.

“We will continue to listen to feedback from those on the ground in India and the advice of the Australian Government.

“Our thoughts are with the people of India at this difficult time.”

Tye explained his decision to leave on SEN WA on Monday morning.

“There was a number of reasons, but the main one was the situation that’s started to happen back home in Perth,” Tye said.

“With a lot of cases in Australia in hotel quarantine coming out of India, and now there’s been a community case spread in Perth and governments are now trying to restrict numbers coming back in, especially WA.

“I just thought to try and get on the front foot and get home before I get locked out of the country. It’s been a long time in a hub – I was doing the calculations earlier and I think I’ve had 11 days at home out of bubbles and hubs since August.

“For me and the person that I am, I just wanted to get home and dealing with the stress of bubble life has taken its toll.”

Sources indicated that some players had been having trouble organising connecting flights out of India.

RCB’s statement on Twitter said: “Adam Zampa & Kane Richardson are returning to Australia for personal reasons and will be unavailable for the remainder of #IPL2021. Royal Challengers Bangalore management respects their decision and offers them complete support.”