Trainer Mark Newnham has resisted putting blinkers back on “frustrating” galloper Money From The Sky as he fronts up again at Kensington on Wednesday but is close to starting a conversation about gelding the four-year-old if he can’t mend his ways.

Money From The Sky showed no interest in keeping up with the field at Warwick Farm last week, despite jockey Josh Parr’s urgings, before charging into third, beaten under a length by Redwood Shadow over a mile. 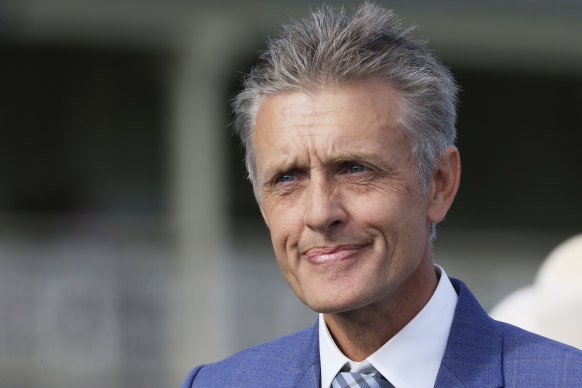 In his second-up win at the same course, the horse was able to jump with them and settle back in the field without tailing off but Newnham saw last start as a case of two steps forward and one step back.

“He’s got all the ability in the world and when you think you’ve got him worked out he throws another curveball at you,” Newnham said.

“He has worn blinkers in the past but I don’t want to encourage him to be over racing again. We went through that phase and seemed to have got out of it.

“He did everything right in his first two runs back then the other day once he got detached from the field he didn’t compete until it was too late.

“[When he won] at Goulburn he was tailed off and he went right around them but you can’t do that in town. He’s talented enough but he still has a few tricks.”

There were only eight acceptances for the Furphy Handicap (1800m) so Newnham sees the race as an opportunity to get back on track.

Naturally, Money From The Sky reeled off the fastest sectionals of the race in the Warwick Farm event last week.

His last 600m was 34.61, according to Punter’s Intelligence, which was over three lengths faster than anything else.

Newnham said there’s no qualms about the quick back-up and that it’s necessary to iron out the “tricks” and avoid a more significant gear change than just adding blinkers.

“He’s a big strong animal and cleaned up that night [after his last run]. The racing won’t hurt him,” he said. “He needs racing to get him to do his best otherwise he might be on the cards to be gelded.”

News, results and expert analysis from the weekend of sport sent every Monday. Sign up for our Sport newsletter