Australian all-rounder Mitchell Marsh has been admitted to hospital in India after testing positive to COVID-19 this week.

Marsh is on the subcontinent playing for the Delhi Capitals in the world’s biggest Twenty20 competition, the Indian Premier League. 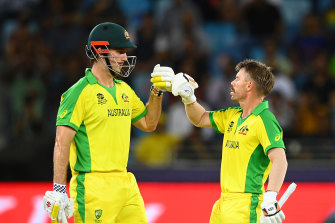 Mitch Marsh (left) in action for Australia in 2021.Credit:Getty

In a statement, the Capitals said they would be “closely monitoring” Marsh’s condition.

It’s unclear as to how serious the T20 World Cup hero’s condition is at this stage. Cricket Australia has been contacted for comment.

Marsh wasn’t the only Delhi squad member to contract the virus, but he was the only one that needed to go to hospital.

“A few more members from the Delhi Capitals bio-bubble, including support staff members, have returned positive tests as well. Though they are all asymptomatic, their condition is being monitored closely by the franchise,” the statement said.

“All remaining members of the bubble are currently in isolation in their respective rooms, and will be tested regularly.”

Delhi are next due to face the Punjab Kings on Wednesday morning (AEST) in Pune.

Meanwhile, former Western Australian wicketkeeper Ryan Campbell is fighting for his life after suffering a heart attack in the UK.

The 50-year-old, who played two one-dayers and three Twenty20s for Australia, is in a coma in intensive care in a London hospital.

“On behalf of all WA Cricket staff, players and the wider cricket community, I would like to pass on our heartfelt thoughts to Ryan, his wife Leontina and their family at this time.

“We know he is in the best care, and hope he pulls through and is able to make a full and speedy recovery.”

Not only was Campbell prolific with the gloves, taking 267 catches and executing 15 stumpings at first-class level, as well as 139 and 11 in his List A career, but he was also adept with the bat.