Michael Vaughan has labelled the standard of batting in the fourth Test between India and England as ‘shocking’ after 16 wickets fell inside the first five sessions. India went in at tea on day two at 153-6 after an England fight-back led by Jimmy Anderson, Ben Stokes and Jack Leach. At the time they trailed by 52 runs.

While the wicket suggests there is plenty in it for the bowlers, the Ahmedabad surface doesn’t appear to be deteriorating as quickly as it did in the third Test and the batting of both sides has come under scrutiny.

That’s including former England and Ashes winning captain Vaughan, who has been left less than impressed and branded it shocking.

Vaughan believes that any side who put a 50-run partnership together will have the upper hand in the final Test of the series, which India currently lead 2-1. The highest partnership of the Test thus far stands at 48, between Stokes and Jonny Bairstow as England recovered in their first innings. 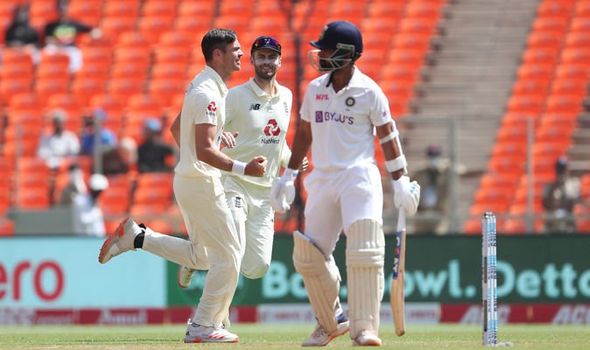 “Already at the stage where whichever team can get a 50 partnership could be the match winner!! Yep, a 50 Partnership.”

Much has been made of the conditions on this tour. Bar their first innings in Chennai, where they posted a mammoth 578, England had failed to score more than 200 in the following five innings prior to the fourth Test.

Former England spinner Monty Panesar spoke exclusively to Express Sport recently of the surface and said: “I think what it is is that India needs to bat well to defend the pitch.

“India didn’t bat well either, it was only in the last innings where it was easy to chase 40-odd and win the game.

“In the second Test match when the wicket was turning, India batted better. They applied themselves better.

“So if India can apply themselves on these spinning wickets, and the bosses which are the ICC justify that we can produce turning pitches and India can score runs on them, then there is no argument because they can prove that yeah you can score runs on it, but if India don’t score runs and neither do England, then I don’t think it’s good for Test cricket that you have short Test matches.

“I think it just means that people won’t tune in as much. You want people to be watching the game and the longer the Test match, the better it is for the game.”