Boom galloper Ayrton has returned in outstanding fashion to win the group 3 Victoria Handicap at Caulfield on Saturday, making it six wins from eight career starts.

Jockey Jamie Kah rode a patient ride, fifth the fence throughout, but when the gap opened in the straight, Ayrton lifted to run past multiple group 1 winner Streets Of Avalon.

The star sprinter-miler had not raced since September after a suspected spider bite prematurely ended his spring campaign. 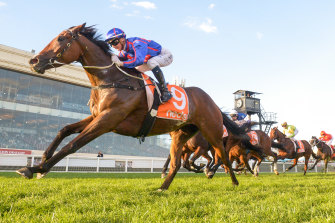 Ayrton, with Jamie Kah in the saddle, dashes towards the finishing post.Credit:Racing Photos via Getty Images

Connections feared his career might have been over, but Mick Price and Michael Kent jnr nursed him back to full fitness and he fired again on Saturday.

Excelida got third at a big price, with Kissonallfourcheeks, one of the other favourites, covered the most ground to finish fourth.

Price said Ayrton would head to Brisbane and would target races up to 2200m.

“If that suits him while we’re training him, that’ll be the program. If it doesn’t, we’ll change.”

Kah said Ayrton may have even improved since his last campaign.

“I was mindful that he was probably coming into it a bit underdone but he was the class horse in the race and I wasn’t going to do anything silly on him like push forward or try and get out and get going early,” she said.

“I wanted to wait and give him the cosiest run I could and everything turned out perfectly for him.

“But he still had to do it and really accelerate through the gate and he’s come back probably better than he was last time I rode him.”

Earlier, Milford won the group 3 Easter Cup over 2000 metres for Mike Moroney, holding off Holbein in a fighting display.

“He goes well around Caulfield. I followed him, he rolled along at a good clip and the 2000 metres, Holbien probably just gets that.

“My fellow was eating up the 2000 stepping up from the mile today. He had a bit of a think about it – he’s only won one race in his time so he had a good think about it when he hit the front.”

It was back to back Easter Cups for Moroney, who last year trained Hang Man to win the race.