Craig McDermott is overjoyed with Mitchell Starc’s leadership of the Australian attack in Adelaide, but equally bewildered by England’s “atrocious” performance with the ball in the first two Tests.

One of Australia’s finest fast bowlers and bowling coaches, McDermott is delighted with the way Starc has led Australia’s attack during the second Test in the absence of Josh Hazlewood and captain Pat Cummins.

“To me Mitchell Starc is an X factor,” McDermott told the Herald and The Age. “You don’t know when he is going to produce that unplayable delivery.

“That first wicket in the first Test [when Starc bowled Rory Burns around his legs with the opening ball of the series] may have looked like one in a million, but that’s what you get with Mitchell.”

McDermott meanwhile has been baffled by England’s decisions, from leaving pace veterans Jimmy Anderson and Stuart Broad out of the first Test, to not bowling first at the Gabba and the lengths the bowlers have delivered.

“I just don’t understand the tactics that England have come to Australia with for their bowling attack,” McDermott, who claimed 291 Test and 203 one-day wickets, said. 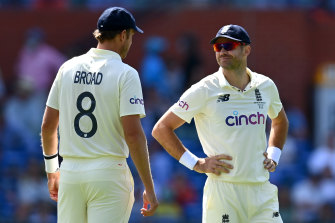 England’s Stuart Broad and James Anderson have struggled in Adelaide after being left out in Brisbane.Credit:Getty

“They bowled semi okay in the first Test, but their tactics in Adelaide were atrocious.

“Bowling bouncer after bouncer was a waste of time, and it backfired badly. We made 450.

“I don’t know what their coach and bowling coach were thinking about doing.

“And I was a bit bewildered when they left a thousand wickets in the shed [Anderson and Broad] for the first Test, and you’re playing on the Gabba.

“I don’t know what their tactics were from that point of view. The whole setup and how they’ve gone about picking their bowlers has been very bewildering really.

“I don’t know what the Poms have done. Even when we beat them 5-0 here in 2013-14 they bowled short. They didn’t get their lengths right in Australia.”

McDermott, who was Australia’s bowling coach during two stints between 2011 and 2016, has a mantra that bowlers must pitch the ball up so it will reach the batsman below the knee roll of the front pad.

“When I took over as bowling coach we had a number of bowlers who were really trying to bash that back of a length. We weren’t swinging the ball much at all,” he said.

“It really wasn’t that difficult to grasp. I just had to get the players’ buy in to accept it.

“If you watch a lot of the fields for our guys we’ve often got a point and a mid-off, and we’re leaving that cover wide open.

“In the first innings, Starcy was bowling to Buttler over the wicket and bowling a good length going across him with the covers wide open, and he made a 15-ball duck. He also had a nick early in the second innings that wasn’t taken.

“That’s just good bowling and good captaincy from Steve Smith. His field placements have been very good, as they always were when he was captain, and he’s got bowlers who know what they’re doing.

“You have to have the captain’s buy in. The bowlers have to be prepared to be driven, and I was fortunate enough to have Michael Clarke’s buy in during my time as a coach. It makes it easier.

“Then I had tremendous bowlers who believed in what we were doing as a group. They were good at executing that all the time.

“We were a great bowling unit, and we still are because I think our bowlers are very much all over it. They bowl those lengths on a dime. They can nip it off the seam and swing it.”