The Maldives is firming as the most likely exit route for the majority of Australian cricketers, commentators and coaches stranded in India following the postponement of the Indian Premier League season. 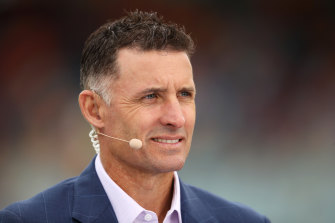 The Hindustan Times reported an IPL source told the Press Trust of India: “Hussey was tested and his sample came positive. We sent it for retesting but that has also come positive.”

Australian Cricketers Association chief executive Todd Greenberg told 2GB radio shortly after 8am on Wednesday he was “not sure” whether Hussey had COVID-19 and was yet to speak to him, given it was about 3.30am in India.

“There’s a number of mixed messages coming out of India overnight,” he said. “They’ll be up in a few hours over there in India so we’ll get some clarity on that as quickly as we can.”

SCROLL TO THE BOTTOM OF THIS STORY TO SEE A FULL LIST OF AUSTRALIANS INVOLVED IN THE IPL AND THEIR SITUATIONS.

Greenberg said it was “probably not an enormous shock”.

“Given at least one of our guys or someone was ultimately going to find a positive test once the bio-security bubble was breached, and ultimately that’s why the IPL tournament has now been postponed,” he said.

Former cricketer and commentator Michael Slater on Tuesday accused Prime Minister Scott Morrison of having “blood on his hands” after the federal government’s decision to legislate a fine of up to $66,000 and five years’ jail if Australians return home from India.

Slater is in the Maldives already, having left India before the tournament was suspended.

Flights between the two countries are banned until May 15 but a number of cricketers made their way home via Qatar ahead of the new rules being enforced.

Warner, who was axed as Hyderabad captain last weekend, shared a photograph on Instagram on Tuesday night of a drawing from his daughter Ivy.

“Please Daddy come home straight away,” it says. “We miss you a lot and love you. Love from Ivy, Indi and Isla.”

In a joint statement released on Tuesday night, Cricket Australia and the Australian Cricketers Association said it understood the decision of the Board of Control for Cricket in India (BCCI) to indefinitely postpone the IPL.

“CA is in direct contact with the BCCI as they work through plans to ensure the safe accommodation and repatriation of Australian players, coaches, match officials and commentators back home to Australia,” the statement read.

“CA and the ACA respect the decision of the Australian government to pause travel from India until at least May 15 and will not seek exemptions.”

Our Morning Edition newsletter is a curated guide to the most important and interesting stories, analysis and insights. Get it delivered to your inbox.