The head of the new stadiums super agency that runs the SCG admits the financial toll of losing the Sydney Test to a virus outbreak would be "significant", but remains hopeful it won't come to that – even as border closures cast it into greater doubt.

While the status of the third Test in Sydney has been under a cloud since the emergence of a new coronavirus cluster on the northern beaches last week, the match's existence on the calendar this summer has been further jeopardised with three states including Queensland classifying the city as a COVID-19 hotspot. 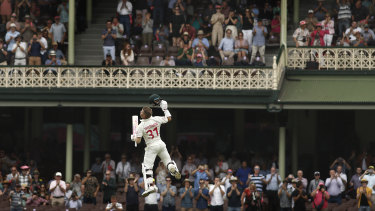 CA's loyalty to Sydney and the influence of key figures such as NSW Tourism Minister Stuart Ayres and Shepherd will, however, only count for so much if the ability for the sport is complete the series is jeopardised.

Switching the SCG and Gabba Tests around is an alternative that has been discussed by CA's coronavirus working group, which met on Sunday, given that would alleviate the problem of the cricket roadshow travelling from Sydney to Brisbane. But broadcasters say playing the next two Tests in Melbourne and then heading to the Gabba for the fourth is increasingly likely.

After a year in which the SCG Trust ran so low on cash because of the COVID-19 crisis, the cancellation of the Sydney Test would hit hard.

"It's our biggest event in the year. It would be hard in this situation to work out what the cost would be because we're in a new paradigm but it would be significant," said Shepherd, the chair of beefed-up new Venues NSW, which controls the SCG.

The SCG Test is the major fundraiser for the McGrath Foundation.Credit:Getty Images

Shepherd said the SCG could be "very flexible" when it came to the schedule if need be.

"But hopefully it won't come to that and we can stick to the program," he said. "As things stand now, the Test is being held in Sydney. That's the government's advice, that's Cricket Australia's advice. We've got 2 1/2 weeks to go, we don't want to start [jumping] at shadows. We'll see what happens."

Shepherd said tickets for the Sydney Test, which had been permitted to have capacity crowds, were "selling strongly".

The McGrath Foundation, which has held its major fundraising campaign on the third day of the Sydney Test for more than a decade, is also planning as if the "Pink Test" is still proceeding at the SCG.

Its founder, Glenn McGrath, won't be in Sydney for the day in any case as he is commentating the series from a studio in India but the fast bowling great was to make appearances by video link. Limitations on spectator numbers would, however, be a setback for the charity's efforts to fund breast care nurses.

A spokeswoman for the Melbourne Cricket Club said there was enough time for the MCG to be prepared for two Tests in the event that Sydney was scrapped. Ground staff had five strips of pitches, she said, and a second could be made ready by January 7, she said.

Broadcasters Channel 7 and Fox Sports said they would not mind whether there were two Tests in Melbourne or if the Sydney and Brisbane dates were swapped.

The interests of the touring side and its governing body, the Board of Control for Cricket in India, would also need to be weighed up.

Hockley said "our preference remains to play the match at the Sydney Cricket Ground".

“Cricket Australia has developed a solid track record of delivery throughout this most challenging of summers and will continue to make appropriate and proportionate decisions in consultation with our biosecurity team, governments, state and territory associations, the Australian Cricketers’ Association, our partners and venues," he said.

“CA has prepared for the possibility of COVID-19 hotspots and state border closures over the course of the summer and the protocols that we have put in place have been effective in ensuring the safety and success of the men’s and women’s domestic and international programs to date."