What started as an unexpected way to get off his PlayStation as a teenager could lead to Ben Thompson’s first Group 1 win in Saturday’s Sydney Cup.

The blossoming Queensland rider grew up in Victoria as the son of greyhound racing trainers and didn’t ride a horse until he was 15.

As he tries to break into the Group 1 club when he rides Adelaide Cup winner Good Idea in the famous colours carried by champions like Saintly and So You Think on Saturday, Thompson reflected on how his riding journey started out of the blue.

His father Jason took him on a trip to see horse trainer mate Frankie Stockdale who put the young Thompson on a stable pony, starting his love affair with horses.

“It was in the Easter school holidays when I was 15 – I was in Year 10 at school and I think Mum and Dad just wanted me to get out of the house and off the PlayStation,” Thompson said.

“I had always followed the horses but it would be about going to a tri-code meeting with Mum and Dad when they had dogs racing or throwing a couple of numbers at my parents to take in a quaddie on a Saturday.

“Then all of a sudden I was mucking out boxes and doing what I could and about a month later I got a part-time job working for Mick Kent on weekends and it all went from there.”

Thompson’s riding journey took him overseas for a stint in Singapore before he moved back to Victoria and then up to the Sunshine State where his partner Stephanie Thornton had previously made the move to ride.

Thornton has got much of the media spotlight in recent times, winning a $1 million race on The Odyssey on Gold Coast Magic Millions day and riding the same horse in the Group 1 The Galaxy at Rosehill last month. But Saturday could be Thompson’s time to shine.

The 24-year-old has gone close to zooming into the Group 1 club before, having 19 Group 1 rides in Australia.

He thought he was about to become a Group 1 winner three years ago when riding Missrock to a runner-up finish in the 2018 Goodwood in Adelaide.

“I thought I was home that day as I went past the favourite for the race (Vega Magic),” Thompson recalls.

“But then Santa Ana Lane gave me windburn about 50 metres out – what a horse he turned out to be.

“I also ran fourth on Booker in an Oakleigh Plate – beaten half a length – and that really hurt because she drew off the track.

“I rode Good Idea in the 2020 (Group 2) Adelaide Cup and he ran second, (trainer) Phillip Stokes said we would go one better this year.

“Thankfully I was able to stick with the horse when I made the move north to Queensland and Philip was right, we went back this year and won the Adelaide Cup.

“He was spot on with what he said.” 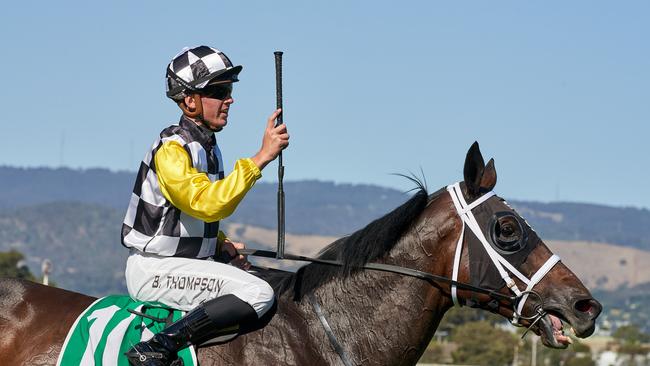 TAB rates Thompson only an minor chance of breaking his Group 1 duck in Saturday’s Sydney Cup (3200m) with Good Idea listed as a $19 chance in latest betting.

However Thompson believes he is a better chance than that and he likes there is nice synergy drawing the inside barrier, the same barrier Good Idea drew last month when winning the Adelaide Cup.

Good Idea races for the Estate of the late Dato Tan Chin Nam, the Malaysian billionaire and global property magnate who won four Melbourne Cups and had a famous association with the great Bart Cummings.

“The list goes on of all the great horses and great riders who have carried these famous colours,” Thompson says.

“The link to Dato and Bart is pretty special.

“The Sydney Cup is an obvious step up for this horse, he is going to need to bring his best on Saturday but in saying that he ran away with the Adelaide Cup and he beat some pretty decent horses that day.”