Ben Stokes says he has no ambition to captain England and has thrown his support behind current skipper Joe Root and under-fire head coach Chris Silverwood.

Stokes had been tipped as a potential successor to Root, whose future has been brought into focus by the demoralising Ashes tour.

As one of England’s most influential players, the all-rounder was seen as an heir to Root. But, following another chaotic day of preparation before the fourth Test in Sydney, where England were left with no net bowlers after a new COVID scare, Stokes said he had no desire to become Test captain.

“I’ve never really had an ambition to be a captain,” Stokes said. “Captaincy is more than about setting fields, picking the team, making decisions out there in the middle. A captain is someone you want to go out and play for. Joe Root is someone I always want to play for.”

Stokes also claimed Root, who finished 2021 with 1708 runs, the third highest return in a calendar year in Test history, had not discussed stepping down from a job many believe is becoming a burden to England’s most important cricketer.

“He shouldn’t be forced into doing it [quitting],” Stokes added. “I’m sure Cooky [Alastair Cook] felt the same way. He did it for so long. When he knew his time was up, his time was up. Those discussions haven’t been entered anywhere near Joe.” 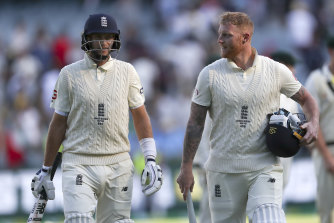 Silverwood’s job is thought to be in a more perilous position after England surrendered hope of regaining the Ashes in just 12 days of cricket. Yet Stokes praised the head coach, who on Sunday became the ninth member of the camp to test positive for coronavirus, and said Silverwood and Root retained the full support of the dressing room.

“The most important people’s opinions are those guys in the dressing room and they’ve got our thorough support,” he said. “Chris Silverwood exactly the same. He’s a real players’ coach. He stands up for you as individuals and players. All the hype in the media recently about their futures, it’s your job to write that. But they know full well they have the support of everyone in there.”

Stokes’ move to put out one fire came as England were fighting another. Fresh COVID issues have threatened to derail their preparations for the fourth Test.

It emerged on Sunday that two of the net bowlers at the SCG learnt they had tested positive while bowling at the England batters. They departed immediately but it left England without any other net bowlers because all the others had to leave as they were deemed to be close contacts.

Silverwood’s positive test took the total in the England camp to have contracted the virus in the past week to nine. He was already isolating after a family member tested positive and has remained in Melbourne. He is asymptomatic and fully vaccinated. He will rejoin England in Hobart for the fifth Test.

The virus is badly affecting England’s coaching staff, with only Graham Thorpe, Ant Botha and James Foster available to work with the players as they look to recover from losing the third Test by an innings.

Glenn McGrath, the former Australia fast bowler and current broadcaster, has also tested positive and is likely to miss the whole of the Sydney Test, which is a major fundraiser for his charitable foundation. McGrath hopes to be out of quarantine in time for day three of the Test – Jane McGrath Day.

England trained after the net bowlers left the group, with players giving each other throw-downs.

Cricket Australia has not explained how the two net bowlers were allowed to go to the SCG before returning a negative test result.

England batter Zak Crawley said: “We’ve been observing the protocols and trying to stay safe. We’ve managed to catch the cases early so we’ve been lucky not to have any players go down. Personally I would [be happy with a bubble], we haven’t got long left. I want to play the two Tests.”

Australia have lost Travis Head for the game and the match referee, David Boon, is also isolating after testing positive.

England have also recalled their Twenty20 players from the Big Bash. Sam Billings, Saqib Mahmood, Tymal Mills, Reece Topley, James Vince and George Garton will fly home and isolate before going to the West Indies for the T20 series that starts on January 22 in Barbados.