The golden arm that first became obvious in his backyard at Penrith has extended to make Pat Cummins the only Australian fast bowler in history to claim an Ashes series as captain.

The dreams he had competing with his older brothers unfolded at the MCG as the fast bowler presided over a ruthless demolition of England, who were bowled out for just 68 in their second innings on Tuesday.

Little more than an hour into the third day of the Boxing Day Test, Australia had won by an innings and 14 runs to retain the Ashes with a 3-0 lead in the five-matches series.

“I grew up playing in the backyard and watching Steve Waugh, Ricky Ponting, those guys win Ashes series,” Cummins said after the Boxing Day triumph.

“It felt a million miles away from me playing cricket in the backyard. Yet, here I am a decade later in that position. It’s madness.

“The MCG is a good reminder each year when you play on Boxing Day. You turn up on Boxing Day morning and do the national anthems. You’ve got a packed house and you’ve got millions of people watching from home. 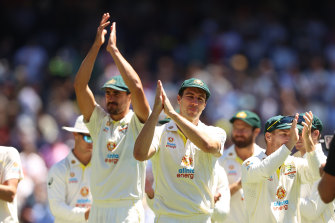 Pat Cummins (centre) applauds with teammates after retaining the Ashes at the MCG.Credit:Getty

“It’s a great reminder each year that you’re part of Australian cricket history. It always takes me back to my childhood. It’s nowhere near what I could imagine my life would become as a young kid.”

Cummins was appointed captain in haste following the sudden departure of Tim Paine, and was then ruled out of the second Test in Adelaide due to being a close COVID contact. He also had to wait to see if the virus would bring a premature end to the third Test.

All the while he has done it his way, with a calm and smiling demeanour which hides a steely resolve that took him through six years of rehab due to regular bone stress fractures.

“I don’t think it’s really hit me,” Cummins said about following in the footsteps of Waugh, Ponting and Michael Clarke. “Those guys were the captains I grew up watching and idolising.

The smiling silent assassin, who is the world’s No.1 bowler, has stamped his understated demeanour on a team that promises so much under his reign.

Any lingering doubts about brushing aside 144 years of Test cricket history to make a fast bowler permanent captain of the team have, like England, been laid to rest.

Cummins cast aside convention when he did at the MCG what England captain Joe Root should have been brave enough to do in Brisbane: win the toss and bowl.

The pedigree paceman then led from the front, claiming the first three England wickets to begin their seemingly inevitable slide towards a series defeat.

“It’s always a dream,” Cummins said. “It’s all gone to plan so far. Even yesterday [Monday] felt like a day when England played really well, but we managed to wrestle it back late in the day.

“It’s just worked out fantastically so far. Winning early on day three at the MCG just doesn’t happen, so it’s a fantastic result.

“To go 3-0 up, it’s the first Ashes victory for a lot of the guys in the team. It’s just a great feeling … It’s what dreams are made of, the way we’ve played.”

But it is Cummins who is the dream. The no-fuss thoroughbred goes by the team nickname of “Winx”, the racehorse that has a stand named after it at Royal Randwick, just an exaggerated straight drive from his home ground, the SCG.

Debate will rage, but Cummins may just be the best fast bowler ever produced by Australia.

He may not have the charisma of Dennis Lillee or searing brutality of Jeff Thomson but of all the pacemen to play for Australia who have taken 100 wickets or more, Cummins has the best strike rate: 46 balls per wicket. For Lillee and Thomson, it is 52.

Now Cummins is an Ashes-winning captain. It promises to be an exciting ride.