The Melbourne Cricket Club has made enquiries about hosting India and Pakistan’s first Test match in more than 15 years, but admits the situation is “complicated”.

MCC boss Stuart Fox has confirmed approaches have been made to Cricket Australia about luring the famous rivals to end their red-ball stalemate at the MCG.

More than 90,000 packed the MCG for the recent Twenty20 World Cup match between India and Pakistan.Credit:Getty Images

India and Pakistan’s pulsating Twenty20 World Cup clash at the ground in October, played in front of 90,293 passionate fans, fuelled hunger for more games between the countries.

Their rivalry has been restricted to major tournaments in modern times; they have not played each other in a bilateral series since 2012 due to ongoing political tension between the countries.

The last Test match between India and Pakistan was way back in December 2007.

Fox said the MCC would “absolutely” love to welcome back India and Pakistan after the extraordinary success of their recent meeting at the MCG. 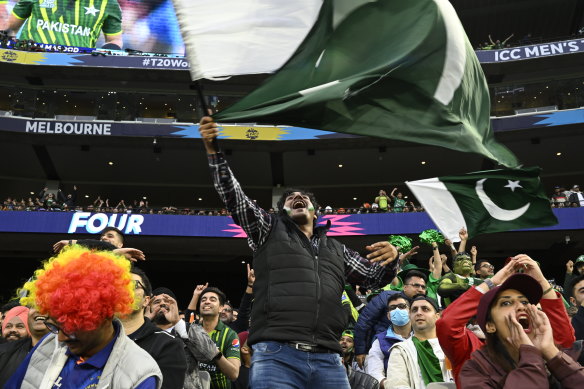 Pakistan will face Australia in the Boxing Day Test next year.Credit:Chris Hopkins

“The atmosphere for that game, I’ve never felt anything like it,” Fox told SEN.

“The noise after every ball was just phenomenal.

“Three in a row would be lovely at the MCG, you’d fill it every time.

“Wouldn’t it be great if it wasn’t just Australia-centric and Victoria-centric, and that we’re catering for all countries and filling the stadium.

“Hopefully Cricket Australia keep taking it up with the ICC [International Cricket Council] and keep pushing for it.”

Pakistan are scheduled to play at the MCG in next year’s Boxing Day Test, with Fox saying Australia needed to engage better with multicultural fans.

“We want them [Pakistan fans] here and it would be fantastic to have a full house day one.”

Ahead of the World Cup match, India legend Ravi Shastri said 150,000 people would attend a game between the famous rivals if capacity allowed.