CHELSEA FAN VIEW: Calling for Lampard's head is the pinnacle of idiocy

India’s players dined at a Melbourne restaurant in an apparent breach of Cricket Australia’s biosecurity protocols for the game's $300 million summer.

The Indian board has launched an investigation after stars Rohit Sharma, Rishabh Pant, Shubman Gill, Navdeep Saini and Prithvi Shaw were seen seated indoors at Secret Kitchen, a noodles and BBQ restaurant at Chadstone Shopping Centre. 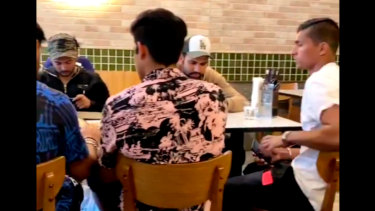 India players eating at a restaurant in Melbourne, seemingly in breach of their biosecure bubble.Credit:Twitter

It comes as the rapidly changing coronavirus situation in Victoria and NSW leaves open the possibility of Sydney hosting the third and fourth Tests of the series.

Staff at the restaurant confirmed to The Sun-Herald on Saturday the group visited on New Year’s Day and dined inside.

Players and staff from both sides have strict conditions on their movement as part of measures to minimise the chances of the lucrative series being affected by any COVID-19 outbreak. They are allowed to eat out, but must be seated outdoors.

An India fan, Navaldeep Singh, posted footage on social media of the group at the restaurant, claiming he had paid the $118.69 bill for the players. 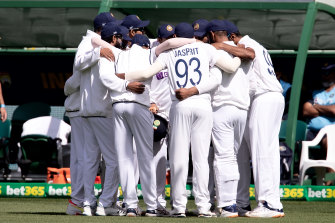 A biosecutiry breach by the touring team could spell trouble given the COVID-19 situation in Melbourne and Sydney.Credit:Getty

Singh's video has been viewed more than 177,000 times on Twitter at 4pm (AEDT) on Saturday and his story published in Indian media.

CA’s biosecurity measures are designed in part to protect players from contracting the coronavirus and spreading it through the hub, but also to reduce their likelihood of being caught up in a venue later to be deemed a hotspot, potentially affecting their ability to travel interstate should state borders close.

Queensland is monitoring the situation in NSW and Victoria, the latter recording 10 new local cases of coronavirus on Saturday.

The Queensland border is shut to NSW but remains open to Victoria, with the issue to be reviewed on January 8. Should it also close to Victoria, broadcasters will face further difficulties moving their staff into NSW.

"While we're not changing any restrictions to NSW and Victoria at this stage, as we've seen things can change really quickly with this virus, so I continue to urge Queenslanders travelling to these states to reassess their plans – if it is not necessary, then consider staying here," Dr Young said on Friday.

NSW Premier Gladys Berejiklian on Saturday made masks compulsory and imposed new restrictions as its coronavirus cluster expanded by seven.

The Premier banned dancing and singing at night clubs while restricting numbers at gym classes, weddings, funerals and places of worship.

However, the Test between Australia and India, scheduled to begin on Thursday, will go ahead with attendance at 50 per cent capacity.

"We consider health and safety first and foremost, but we also need to think about wellbeing and jobs and the economy," Berejiklian said.

"And that's why by putting these measures and settings in place we are confident we can continue to increase and encourage economic activity, give confidence to business and jobs, but also, of course, keep the virus at bay."

CA cracked down on Brisbane Heat pair Chris Lynn and Dan Lawrence and the club for bubble breaches after the duo boarded cabs on a night out in Canberra last month.

Related posts:
MLB News:
Finally, Aaron Rodgers vs. Tom Brady: Inside playoff matchup 13 years in making
Are Jim and John Harbaugh twins? Get to know football’s most famous coaching brothers
NFL awards: Chiefs, Browns, Bills big winners in voting for Sporting News’ 2020 honors
Chiefs OC Eric Bieniemy: 'Yes, I do want to be a head coach'
Basketball News:
NBA trade rumors: Cavs planning to move Kevin Porter Jr. after locker room outburst
Is Kyrie Irving playing tonight? Here’s the latest news on Nets star’s return
James Harden: Main takeaways from reported trade to Brooklyn Nets
Recent Posts
This website uses cookies to improve your user experience and to provide you with advertisements that are relevant to your interests. By continuing to browse the site you are agreeing to our use of cookies.Ok