Justin Langer has declared he has no intention of stepping aside and will seek a new contract with Cricket Australia.

Langer, coach and selector, has endured a tumultuous year when he faced “confronting” feedback from players and was forced to change his methods but he now stands as a Twenty20 World Cup winning coach and is on the verge of a home Ashes series victory with the Australians 2-0 up heading into the Boxing Day Test. 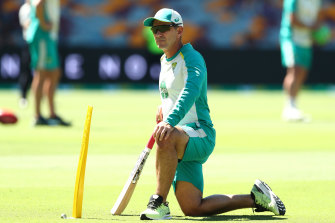 His four-year contract expires in June and the general feeling among those close to the team had been that he was unlikely to receive an extension, but the World Cup win in the United Arab Emirates and the manner in which he has taken a more reserved role and delegated more to assistants means his argument to go on has been strengthened.

“I have never thought differently, to be honest. I have been consistent with what I have said for the last four years. I love my job,” Langer said on Thursday, echoing his comments of July.

“The boys are playing well, no doubt about it, it’s a great team to be involved in. So, nothing has changed from my point of view.”

Langer confirmed he wanted to remain in charge of the Test squad and the limited-overs teams in the long term, for there has been debate that the senior coach for the red-and-white-ball teams should be split. Steve Waugh is among those who has urged CA to consider splitting the roles.

CA has applauded Langer, now more relaxed around the players, for adjusting his style and says a decision on his future won’t be made until after this series is completed.

Langer’s senior assistant Andrew McDonald would be the ideal white-ball coach if Langer remained and the roles were split. McDonald, who listens closely to players and has an excellent rapport, is seen as a fine leader and also capable of guiding all three teams.

There is a Test tour of Pakistan slated for early next year – this would be Australia’s first to the region since Mark Taylor took his side there in 1998 – before Langer’s contract expires.

Under Langer, of the blue-chip series, the Australians have twice lost campaigns at home to India but did draw to retain the Ashes in England in 2019. They also reached the semi-finals of the 50-over World Cup in 2019.

His initial role was to overhaul the team’s culture and regain the respect of the Australian public after the ball-tampering scandal of 2018, a key plank he has achieved.

However, his intense, erratic and emotional manner became an issue with support staff and players, and prompted an emergency meeting called by CA chief executive Nick Hockley and chairman Earl Eddings with captains Tim Paine and Aaron Finch and heir apparent Pat Cummins in August. Finch said Langer had been delivered “confronting” feedback from a detailed review of players and staff at a Gold Coast pre-tour camp.

Eddings was a strong supporter of Langer but has since left his post, having lost the majority support of state associations. Paine publicly backed Langer after the emergency meeting but has also since gone, embroiled in a sexting scandal.

This means new Test skipper Cummins will now have greater input into whether Langer is the right man to help guide the next stage of this team’s development, a role previous captains, including Mark Taylor, Steve Waugh and Ricky Ponting, had on their respective coaches.

As the Australians gear up for the Boxing Day Test, Langer suggested there had been a calming of the waters in his relationship with the squad in terms of how all parties now fully understood their role, and how all had even handled Cummins’ sudden omission from the Adelaide Test because he was a close contact of a COVID-positive diner at a local restaurant.

“Not surprised. We talk about staying calm. What I like about, I think I found out about midnight the other night about Patty Cummins and what was happening, so I just really like how … everyone is staying calm, knowing the process, everyone knows their roles in the team,” Langer said.

“Whether it’s all the players, they are clear on their roles, whether it’s the selectors or the coaches, everyone is clear in their role; therefore, everyone stays calm. Even through the quarantine period on the Gold Coast, we had excellent facilities, everyone stayed nice and calm and got on with what we had to do. It was nice to start the series as strongly as we have.”