Ricky Ponting could have been quarantining in a Dubai hotel as coach of Australia’s Twenty20 team if history had not taken such a tumultuous turn.

Previous Australian coach Darren Lehmann wanted Ponting in the T20 role before the sandpaper scandal blew up Australian cricket during the 2018 tour of South Africa and maintains that the roles should be split.

“I look back now and I think I coached too long,” Lehmann told the Herald and The Age. “I probably should have bowed out 12 months before that. I reckon four years is a good cycle when you’re away from home 300 days a year.

“If you split the role there is more longevity because you don’t have to do everything. And it has to be done properly so the T20 team can specialise. That’s just sensible.”

Whether current coach Justin Langer lasts beyond the Ashes this summer is a moot point. He has headed to the UAE for the T20 World Cup following a player and support staff mutiny which forced Cricket Australia to publicly guarantee his tenure until the former Test batsman’s four-year contract ends midway through next year.

Lehmann supported Langer being in charge of Test, one-day and Twenty20 teams when the former West Australian and Scorchers coach was given the Australian job to reinforce a consistent message. 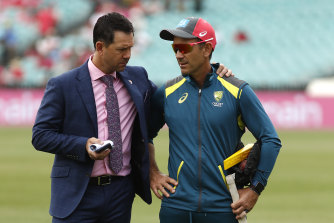 However Lehmann, who coached the national team for almost five years from 2013, feels this is unsustainable in the longer term.

His voice rises as the all-consuming nature of guiding Australia’s biggest sporting team in the national spotlight comes flooding back.

“It’s a lot of travel,” Lehmann said. “It hasn’t been as much at the moment because of COVID but when it does open up and you have to catch games up we could end up with the Test and T20 teams in different countries.

“That’s what happened when I was coach. We had the Test team preparing for a series in South Africa and I was in New Zealand with the T20 team. It’s only going to happen more in the future.” 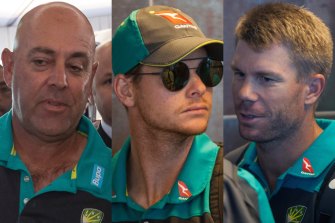 Darren Lehmann’s five years as Australian coach came to an end in 2018 following the calamitous events in South Africa.Credit:AP

It was the same scenario earlier this year when assistant coach Andrew McDonald took an Australian T20 team to New Zealand as Langer prepared for a Test tour of South Africa, which was eventually called off because of COVID concerns.

Lehmann found the constant demands of travelling was multiplied by the bureaucracy that went with the job.

In the months before resigning in tears following Sandpapergate, Lehmann and former high performance manager Pat Howard were working towards that help coming from one of Australia’s finest players.

An assistant coach to Lehmann at times through the 2017-18 summer and subsequent white-ball tour of New Zealand, Ponting made it clear he was keen to be Australia’s T20 coach.

“He was an extremely popular candidate and had been incredibly influential on the New Zealand T20 tour,” Howard said. “He had given great energy to the players and coaches in that period.

“Darren coached on that tour but took very much a back seat. He was obviously tired. I tried to give him a tour a year off.”

Having won an IPL title coaching the Mumbai Indians, Ponting is currently coaching the Delhi Capitals in the UAE, who sit on top of the table. He told the Herald and The Age he was “very interested” at the time.

“I had a few chats with Pat Howard. It never got to the detail of specifics, timing, resources, structure etc as there was no time pressure for that to happen,” Ponting said. “It was an open-ended discussion. 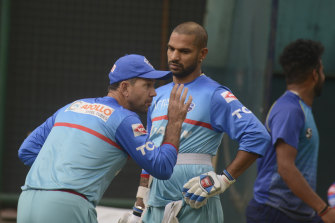 Ricky Ponting imparts his wisdom on Shikhar Dhawan in his role as Delhi Capitals coach in the IPL.Credit:Getty

“However the events in South Africa in March 2018 led to so much change in Australian cricket and the appointment of Justin Langer to replace Darren Lehmann, across all three forms, was absolutely the right decision.

“My life has changed a lot since then. IPL continues to be my coaching priority and it works well with my media commitments with the Seven Network, Cricket Australia and Sky in the UK.

“The rest of the year is spent with my family and enjoying a work/life balance that I have never had before. Right now, I would have to give up so much to take on a national role. It’s just the wrong time for me.”

This highlights a major problem for Australian cricket. Some of the best candidates for coaching roles at a state and national level such as Ponting, Trevor Bayliss and Simon Katich get paid far more for spending 10 weeks at the IPL rather than 10 months in the Australian system.

Having Ponting in the Australian coaching system would have been of enormous benefit. This was brilliantly highlighted during a guest stint as an assistant coach to Langer during the 2019 World Cup campaign in England.

Not only was his energy and enthusiasm infectious, his advice was gold and he proved an important confidante to both Langer and the players.

It is a role Ponting would be open to in the future.

“I’ve really enjoyed those one-off stints and I would love to do them again if the circumstances were right for the coaching group and my own situation,” he said.

Ben Oliver, Cricket Australia’s executive general manager of high performances and national teams, says there are no plans to split the role.

Maybe I’m old-fashioned but I think it is still a role for one coach … it’s really important that you have continuity.

Sources, however, claim assistant coaches McDonald and Michael Di Venuto have been brought on board with a strategy to take white-ball tours in future as part of a plan to help ease Langer’s load.

While there have been ongoing concerns about Langer’s intense coaching style it has been micromanagement involving his assistants which has been the more recent focus.

There was an attempt to deal with this during a player and coaching staff pre-tour gathering on the Gold Coast mid-year, with white-ball captain Aaron Finch later describing some of the feedback Langer received from a player review as “confronting.”

However, the tours of the West Indies and Bangladesh in July and August led to more discontent. Cricket Australia chairman Earl Eddings and CEO Nick Hockley were forced to have an emergency meeting about the coach with Finch, Test captain Tim Paine and vice-captain Pat Cummins. 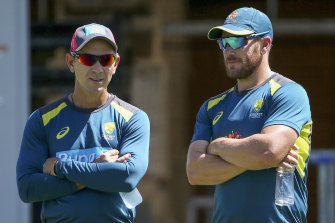 Limited overs captain Aaron Finch, right, spoke this week of the value of being able to give feedback on coach Justin Langer.Credit:AP

The three leaders then had one-on-one sessions with Langer to try and reinforce their concerns.

“It was a really, I suppose, a beneficial process to be able to give really strong feedback and see the action that’s been taken on the back of that,” Finch told a departure press conference on Wednesday, alluding to more defined roles for Langer and his assistants.

Mickey Arthur, who was suddenly replaced by Lehmann as Australian coach at the start of the 2013 Ashes tour, has a different view on coaching at international level in the modern game.

A former coach of South Africa, Australia and Pakistan, Arthur is currently coaching Sri Lanka in Oman, where his team is playing a series of warm-up matches ahead of the T20 World Cup.

“Maybe I’m old-fashioned but I think it is still a role for one coach,” Arthur said.

“It’s around you, your assistant coaches are where you get creative with the different disciplines.

“But I think it’s really important that you do have continuity, particularly with the last two teams I’ve worked with: Pakistan and Sri Lanka. You have to have continuity because within the system you develop trust.

“It’s a system that hasn’t had a lot of consistency in terms of selections and decisions.”

Even so, Arthur agrees that the occasional tour off is important, to give opportunities to assistant coaches.

“You do need to stay refreshed but at this time with COVID it’s just been so tough for everybody,” he said. “As cricketers and coaches we keep moaning about bubbles and it’s not fun, it’s not good.

“But we’re still doing what we love and there are a whole lot of people who are far worse off than we are.”

Whatever happens with the coaching set-up in Australia something has to give. Many feel the current one-coach structure can’t continue under the same pressure-cooker environment.