John Gosden showered praise on Hollie Doyle after she swooped on Nashwa to land her second Group One race of the season in the Nassau Stakes at Goodwood.

In contrast to her Prix de Diane win last month, when Doyle had to race Nashwa prominently to overcome a tricky draw, Britain’s most successful female jockey played a waiting game before launching the 6-5 favourite for a length-and-three-quarter victory from Aristia.

Gosden said: ‘Hollie Doyle is a star. She has an incredible work ethic. As a rider, she is very savvy and strong with great balance.

‘She has the most wonderful personality and she is so applied and focused. She is a credit to herself.’ 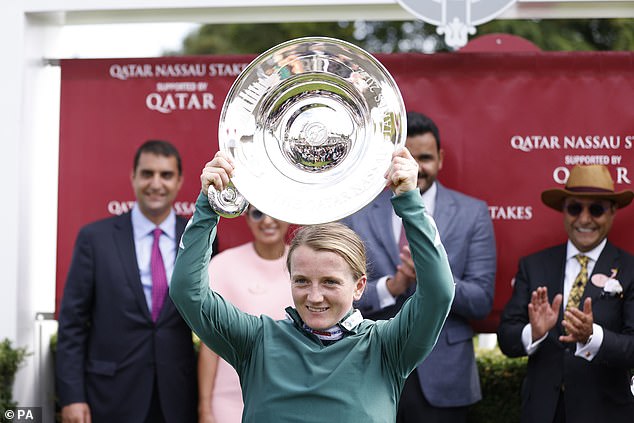 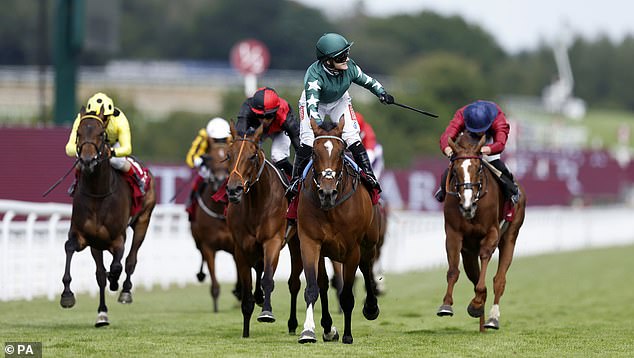 Doyle, 25, the first Flat jockey to 100 wins this season and currently second to William Buick in the title race, now has four Group One wins in her career and the appetising prospect of more on Nashwa.

The filly, owned and bred by Imad Alsagar who retains Doyle, has the Prix de l’Opera at Longchamp’s Arc meeting in October on her agenda as well as a shot at the Breeders’ Cup Filly & Mare Turf at Keeneland.

The plan is then to keep her in training next year.

Doyle’s win came with mother Caroline watching on and there was a flash of emotion with a fist-pump towards the crowd as she crossed the line. 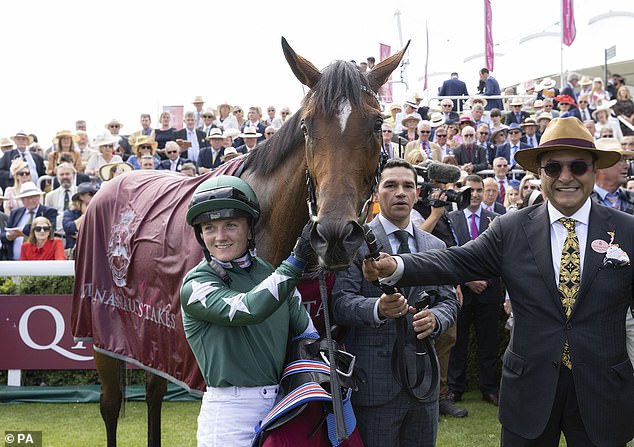 Doyle, who also won the Jaeger-Lecoultre Nursery Handicap on Michael Dods-trained Prairie Falcon, said: ‘Every Group One means a lot. You’ve got to enjoy it while it lasts because you get home tonight and you’ll be back into work mode for the next day.’

One of Doyle’s previous big wins this season came on Archie Watson-trained Bradsell in the Coventry Stakes at Royal Ascot.

The form looked warm at the time and is even hotter after third-placed Royal Scotsman scorched home in the Richmond Stakes for the Paul and Oliver Cole stable. 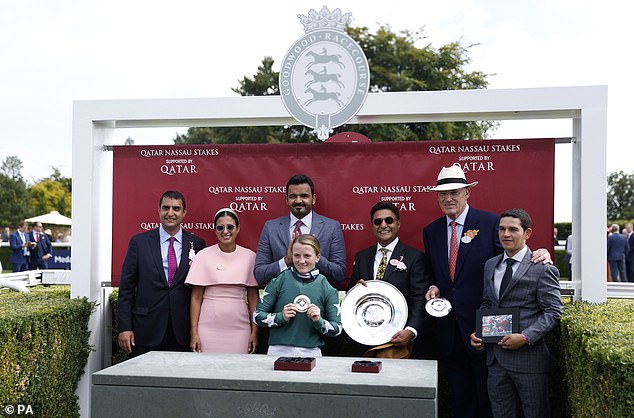 Paul Cole won the Richmond three times before — 1985 (Nomination), 1991 (Dilum) and 1994 Sri Pekan — during a golden era for the stable in which a season rarely went by without him securing a top two-year-old prize, thanks to the likes of Culture Vulture, Magic Ring and the 1991 Derby winner Generous.

The Jim Crowley-ridden 5-6 favourite, who beat Al Karrar a length and a half breaking the track record, looks another gem for the Cole team.

Unlike at Ascot, Royal Scotsman got early cover yesterday and produced a lethal kick to burst clear.

He will now go for the Group One Prix Morny.

Paul Cole said: ‘I can’t see anything around that has as much speed as him. There are very good races on the horizon.’