Zaaki showed echoes of turf legends Winx and Might And Power on Saturday with a crushingly dominant victory in the Doomben Cup (2000m).

Not since Winx won her second Cox Plate and second George Ryder Stakes had there been so big a margin in a group 1 race in Australia and this was as easy as ABC for Zaaki, who can sit comfortably alongside Might And Power’s track-record success in the 1998 edition. 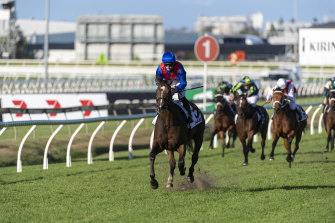 Zaaki was arrogant in what jockey James McDonald labelled a “bullying” performance that looked like it was done in cruise control.

“It dead-set couldn’t have worked out any better. I got across at my steam and ended up having cover for a good four or five furlongs right up until the 600m, he had done no work and he exploded,” jockey McDonald said. “It was a devastating performance.

“I think 10 furlongs is going [to be] his trip. He got into his rhythm today and he enjoys it and gets a bit of confidence out of bullying his rivals.”

The official margin was seven lengths but it appeared more as Zaaki gave a galloping exhibition and lesson to rivals who finished in another postcode. Toffee Tongue and Brandenburg filled the minor money.

Zaaki had sat behind Brandenburg until the 600m mark when McDonald eased him to the outside of the leader.

He eased up to his hindquarters and levelled by the turn as the pair put lengths on the rest of the field. But by the 300m mark Zaaki was heading for a world of his own and kept extending the margin to give trainer Annabel Neasham her second group 1.

“He [McDonald] was very confident. He said ‘just leave it up to me. I’ll get him in the right spot. We won’t overcomplicate things.’”

Zaaki was immediately made a $5 favourite for the Cox Plate.

Meanwhile, it was the Tommy show at Rosehill, with Tommy Berry riding a winning treble and Tommy Sherry a double but the day finished on starkly different ends notes for the pair. 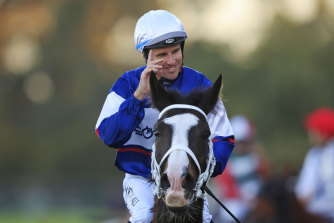 Tommy Berry salutes after winning the last at Rosehill on Mubariz, his third winner for the day.Credit:Getty

As Berry booted home Mubariz for Chris Waller to close the day a winner, leading apprentice Sherry was in the ambulance with a suspected broken right wrist and a strained left wrist after coming off Tooradin on the way to the barriers.

He had earlier won with I Am Power and Mirra Vision, but had little hope of staying in the saddle when Tooradin shied and sent him to the ground just before the winning post.

Sherry had only just returned from a broken shoulder and faces another stint out of the saddle.

Berry continued to take advantage of premiership leader James McDonald being in Brisbane and closed the gap to 10 as he went to 94 city wins for the season.

After winning on JJ Atkins-bound Overmann, Berry took the feature of the afternoon with a beautifully-judged ride on Polly Grey in the Lord Mayors Cup.

The Wyong Cup winner took the field up to the leader and was then too strong for favourite Parry Sound.

“She was there to be beaten because she’s had to take up the rest of the field and Parry Sound got the beautiful cart up behind me,” Berry said.

“But she just went into another gear when Parry Sound came up next to me.

“It is good to get those wins but I need more if I’m going to catch James.”