Paceman Josh Hazlewood has set his sights on Sydney after all but ruling himself out of the Boxing Day Test on Friday.

The giant quick did not put his strained side to the test while fellow members of the pace cartel hit full tilt in Australia’s main training session for the week. 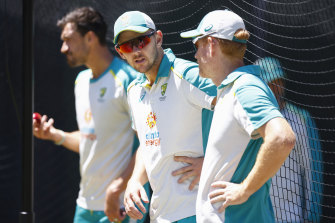 Josh Hazlewood looks on at training on Christmas Eve.Credit:Getty Images

There is no official confirmation from the Australian camp but given he did not bowl a ball there is almost no way he can return to the XI in Melbourne.

He would also have to make significant ground in the coming days to get himself fit for the New Year’s Test starting in less than a fortnight’s time, though if Australia are 3-0 up there would be little point in rushing him back.

The return of captain Pat Cummins shapes as the hosts’ only change for a game they need to only draw to ensure the urn remains on Australian soil.

Cummins is likely to replace Michael Neser, with Mitchell Starc and Jhye Richardson both showing no ill effects at training from Australia’s last-day victory in the Adelaide Test.

The inclusion of Cummins strengthens an Australian side, whose confidence is sky-high after outclassing the embattled visitors in the first two games.

All-rounder Cameron Green confirmed he is not carrying an injury after being held back by deputy captain Steve Smith on the final day in Adelaide.

“I didn’t have any conversations with ‘Smudge’. I was completely fine, ready to go, it’s just we were in a really good position,” Green said.

“They just thought we could get through the game without bowling me and keep me a bit more fresh for this game. The boys bowled beautifully, credit to them.”

Green says he is still overwhelmed wearing the baggy green, though his actions on the field suggest there is little in the cut and thrust of Test cricket that fazes the youngest player in the Ashes.

It took the all-rounder until his fifth Test to break through for his first wicket but he now has five next to his name, including the scalp of England captain Joe Root twice and all-rounder Ben Stokes.

Modest to a fault, Green would not engage in any talk about him having the wood over one of the best batters in the world even if his teammates have joked about it in the rooms.

He has, however, made an impact upon Root, who has tailored his training so he does not fall victim to the probing fourth-stump line of Australia’s fast bowlers.

Green is yet to make as big a contribution with the bat, averaging 30 with just one score above 50 in 10 knocks. Four of his highest five scores have come in Australia’s second innings, a trend he would like to remedy.

Green said he is starting to feel more comfortable about his bowling, which is proving a big asset for Australia.

“You still get a bit overwhelmed when you get out to bat or bowl, but that’s petty natural for any 22-year-old playing Test cricket,” Green said.

“[It’s] definitely something to work on, a work in progress.”