National vice-captain Rachael Haynes has urged players to remain open-minded amid a growing backlash against new rules introduced into the Big Bash League.

Cricket Australia on Tuesday joined the likes of the NRL and Super Netball by introducing new rules ahead of the 2020-21 BBL season in an effort to make the game more entertaining. 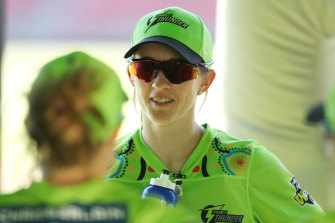 Teams will also now have the ability to substitute an X-Factor player, named as either the 12th or 13th player on the team sheet, to replace any player who is yet to bat or has bowled no more than one over at the ten-over mark of the first innings.

The Bash Boost will reward whichever team's 10-over score is the highest with one competition point.

This year, Super Netball caused major controversy with the introduction of Super Shot – which awarded players two points for a shot taken from the outer portion of the goal circle in the final five minutes of each quarter.

The rule change saw Australian captain Caitlin Bassett driven out of the domestic league due to her inability to adapt to the rule.

"I didn't necessarily watch a lot of netball on TV but I found myself watching more games because of that innovation," Haynes said about the Super Shot.

"I think that's sometimes why players get a bit funny about it because it's their career…sometimes little rule changes can have a big impact on players roles in teams."

“What a load of junk,” he said. "You actually need to go backwards when [the BBL] was the most successful competition on the planet like the IPL continues to be.

T20 veteran Shane Watson said in a blog post that the new rules were "gimmicks" introduced in a "misguided attempt to re-invigorate the tournament".

"I just can’t seem to get my head around why there are people out there who are trying to re-invent the wheel when the wheel was not broken," he wrote. "It just had hit a little rocky ground, in which some really simple measures that were already put in place, would create a slipstream back to the very top again."

“We’re confident our fans will love what these innovations bring to the game as many of the world’s top T20 players, plus our next generation of Australian stars, bring them to life on field," he said.