Cameron Green’s courage to tinker on the run with his technique was rewarded with a knock that will keep the wolves at bay.

As fellow young gun Will Pucovski made a winning return to competitive cricket in Melbourne’s first-grade competition, Green became the latest Australia player to prove Shane Warne wrong after helping his team swerve a second-innings banana peel on the fourth day.

The West Australian may have been dining out on some buffet bowling by the second half of his innings of 74, but he had earned the right to help himself.

On face value, the situation appeared similar to that of last year’s Sydney Test against India but Australia were further ahead on that occasion.

England sensed a rare opening in the game when Green arrived at the crease with Australia awkwardly placed at 4-86, still with some ground to make before extending their lead beyond 300.

A scratchy starter, even when he plays at club level, Green was watchful early against James Anderson, Stuart Broad then Mark Wood. His confidence grew through a 179-run stand with comeback-king Usman Khawaja.

By the time Anderson returned for a second crack at Green, the West Australian was set, driving and pulling with confidence. 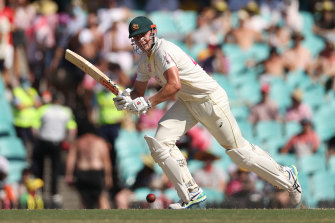 The drive down the ground Green played to Anderson was the type of shot he would have found difficult to play if not for the hours of remedial work he performed in the nets to land his foot straighter.

He joins Mitchell Starc and Khawaja as players who have made Warne eat his words. The leg-spin great had been critical of Green after he made just five in the first innings, suggesting selectors would be seriously considering his place in the XI for the Hobart Test.

With a series average of 14 at the time, Warne’s criticism of the No. 6’s batting was not unwarranted, though they were another reminder of the ridiculously high standards set for Test all-rounders.

A first-class average of over 50 with the bat suggests it is only a matter of time before Green, averaging 30.6 at Test level, also improves his numbers in the baggy green. He will not be the player making way for Travis Head.

“He’s a real star in the making. We’ve seen enough in his bowling to suggest he’s already a star with the ball in hand,” former England captain Michael Vaughan said on Fox Cricket.

“The way he played today gave us a glimpse of what could come in the future. I think he’ll become more consistent. I think he’ll work out a method when he first goes out there.

“[He] still looks a bit rigid at the start of the innings, but we saw once he got confidence and finds a bit of rhythm he’s a fine cricketer.”

Green’s seamers will become even more important in Hobart, with Josh Hazlewood officially ruled out of the fifth Test. The giant quick will remain in Sydney to continue his recovery from a side strain he suffered last month in the opening game of the series.

Meanwhile, Pucovski came through unscathed in his first competitive game since seriously injuring his shoulder on Test debut in Sydney 12 months ago. Opening for his club Melbourne, Pucovski made 40 off 68 balls in the Demons’ comfortable nine-wicket win.