We start Showcase Cup and Big Dance qualifying day over the middle distance on a track that is very likely to tumble well into soft or even heavy range, with persistent rain forecast. Smart mare 4. Lasting Kiss is beautifully placed at the weights coming back from metropolitan company over the border just 12 days ago where she was edged out by a nose. Only missed a place once in her last three, and drawn to get ideal cover just off the speed. 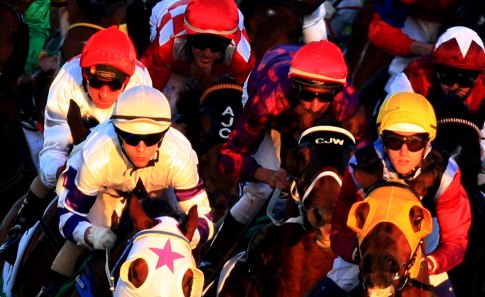 Racing heads to Lismore on Thursday for an eight-race card.Credit:Jenny Evans

Dangers: Progressive four-year-old 6. Kapsali shoots for three straight wins tackling a tougher grade and draws to get a plumb trail off the fence. Despite a sharp weight hike coming back from deeper opposition, 1. At Witz End is a tough performer and deep into his prep. Did his best work late in a BM 90 on the Gold Coast last start, and is ready for a return to this longer journey.

By Epaulette, and loves wet ground. Another one eyeing a hat trick of wins is 3. Swanston coming off a dominant Open Hcp win at the Gold Coast, and bred to thrive in rain-affected ground, although shoots up sharply in weight. Include 2. Badoosh from the inside gate in wider exotics.

How to play it: Lasting Kiss to win. Odds and Evens: Evens

Improving four-year-old 1. Rhythm Is A Dancer didn’t get a lot of luck at a key stage early in the straight fourth-up at Scone when hitting the line late in a more than handy maiden. That will top him off nicely for this, and he’s bred to get through rain-affected ground.

Dangers: Can’t dismiss rapidly improving 2. Captain Underpantz third-up after charging home from last to miss by a head a fortnight ago. Gap to the rest headed by 7. Victory Beans who is back up in distance; 5. Last Descend with blinkers coming off; and 8. Dante Aligheri who improves second-up.

How to play it: Rhythm Is A Dancer to win. Odds and Evens: Split

Open and competitive sprint. Very keen on lightly raced six-year-old 4. Quatum peaking fourth-up over more ground. Worked home nicely in superior class at Grafton 25 days ago behind a smart winner, and the second horse from that race then scored a spectacular near last to first win on Monday.

Dangers: Improving four-year-old 1. Headbreak has had two handy runs back in superior company and can go close here, although a query if the track does get near or into heavy range. Honest 2. Captivare finds a nice little class drop from the inside draw and should land a handy trail behind the speed. Both 5. Look A’like third-up; and improving 9. Star Of Shalaa who is hard fit; can run into a place.

How to play it: Quatum to win. Odds and Evens: Split

Any number of chances here in a race with good speed. Like Warwick Farm-based filly 14. Old Fashioned Rose at just her second start. Worked home late on debut in Soft 7 ground at the Sunny Coast, and will appreciate being drawn out more here where she can get to the outside. Is by world class US sprinter Caravaggio.

Dangers: A sharp trial win over the border, and blinkers coming off, augur well for promising mare 10. Savarosa first-up since autumn. Hit the line in metro grade at only her second start, and reportedly has come on very well. Lightly raced Queenslander 2. Beau Flyer has the progressive ability but has to overcome a tough draw second-up off a lengthy break. So too, 8. Adelaide Fever who improved sharply a fortnight ago dropping back from provincial company, but is also drawn in the car park. Keep safe at bigger odds 11. Spiele third-up; and 1. Bay’s Spirit who has placed in his last two, and a stablemate to the top selection.

How to play it: Old Fashioned Rose to win and box exacta 2,10,14. Odds and Evens: Evens

Another very testing and wide-open battle, especially if the track downgrades are well in play. Home track mare 7. Beef Week Princess hasn’t always shown it, but she has oodles of finishing ability. Did her best work late in two runs back from a long spell, and is well treated at the weights under 55.5kg coming back from CL3 level. Suited over more ground, so watch for her settling back behind a solid speed and thundering home late.

Dangers: Talented mare 1. Moskeeta will appreciate dropping back to this level after being out the back in a Randwick Highway. Had won her previous two around this region, both times surging home from midfield in soft ground. Stablemate mare to the top selection 6. Rose Bouquet is a serious threat deep into her prep. Had a run of strong finishing efforts before dropping out at Eagle Farm. Draws okay, and winkers replace blinkers.

Like the way 5. Boogie Wonderland has attacked the line in his last two after a dominant maiden win in a weak race three starts back. Drawn to get a nice trail, and handles rain-affected ground. Gold Coast mare 3. Ma Ma’s Rose scored an overdue second win 19 days ago surging home from well back in heavy going, but tackling a race with more depth here. Included in trifectas and first fours 4. Feirme Prince with a gear adjustment; and 9. Blend off a dominant all-the-way CL1 win here 19 days ago.

The feature sprint on the card shapes up well for talented five-year-old 9. Mikado second-up. Charged home to beat all bar the winner resuming in strong provincial grade, and relishes rain-affected ground. The one to beat.

Dangers: Tough seven-year-old 2. Dubai Tycoon has won his last two from well off the speed, but drawn out and forced to give some handy sprinters plenty of weight. From over the border, US-bred 6. V J Day has just missed in his last two against high BM opposition, and gets weight relief here from a handy on-speed draw; while 8. Daltoro third-up; and 10. In Awe Of Me with blinkers going on; head the rest.

How to play it: Mikado to win. Odds and Evens: Split

The feature Cup with eligibility to the Big Dance is on the line and plays the right tune for high-class seven-year-old 3. Stuck With You deep into a well-spaced prep. Swept clear early in the straight for a dominant BM 76 win when heavily backed two starts ago before only collared late in much tougher BM 90 grade at Doomben. Looks fairly treated at the weights back to this company, and will roll forward from a middle gate.

Dangers: Keep safe 6. Ambridge who shoots for a third straight win up in grade from a nice trailing draw. Topweight 1. Macchina Volante is inconsistent on the floor, but comes through some strong form races, and is a heavy track winner; while expect 4. Ambitious Prince to be waltzing home again down in weight after an impressive heavy track win in the Tuncurry Cup.

How to play it: Stick With You to win. Odds and Evens: Split

Got plenty of time for improving home track three-year-old 14. Stoinka who is much better suited drawn to get to the outside and coming back in distance. Bolted in his maiden here two runs ago before just behind the place-getters in a similar grade. By an unfashionable sire who was right at home on wet tracks.

Dangers: Progressive four-year-old 1. Gobbled is the immediate threat off a tidy CL2 win, and big weight has been off-set with a 3kg claimer booked. Keep safe at big odds both 2. Franklin Corners who hit the line late in a similar race only 11 days ago; and 5. Just Cosmos who drew okay and won here three starts back.

How to play it: Stoinka each way. Odds and Evens: Split

News, results and expert analysis from the weekend of sport sent every Monday. Sign up for our Sport newsletter