Police arrested another 33 people at the Melbourne Cricket Ground yesterday —the second day in a row of violence and rowdy behaviour. 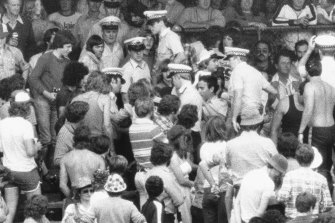 Police move in as another brawl erupts in the MCG.Credit:The Age Archives

On Saturday during the match between Australia and England, police arrested 42 spectators and charged others on summons with offences ranging from being drunk and disorderly, assaulting police, offensive behaviour, indecent language and discharging a missile.

Police said yesterday’s crowd was quieter. But there were still 33 arrests.

Last night many complaints about loutish behaviour on both days were made to The Age’.

One woman said she was forced to move after two men began exposing themselves near her two young daughters. An elderly man said he had felt -ashamed to be an Australian” after seeing a man urinating into a beer can in full view of women and children.

On Saturday more than 50 friends of the arrested people followed police vehicles to the Russell Street watchhouse and waited outside.

At one stage, police linked arms to prevent the group moving into the watchhouse. The group drifted away as those arrested were bailed.

Despite the number of arrests at the MCG during the past two days, police last night said they were not blitzing drinkers.

Most of Saturday’s arrests were made about 4 pm.

A policeman who was on duty at the ground said: “The alcohol and the heat beat most of them.

“Some of them lust got too carried away.”

During yesterday’s match, police moved in to break up scuffles.

One man was charged with wilful and obscene exposure after a nude streak on to the ground and two others were charged with throwing cans.

Most were charged with being drunk and disorderly.

Chief Inspector John Blogg of the police public relations division said “Police only intervened when the peace was being disturbed.

“People have the right to attend sporting functions without being molested in any way by others who treat it as a social drinking occasion.”

Richards, 27, tore the heart out of the Australian bowling, hitting 16 fours and one lofted six on his way to an unbeaten 153 not out.

Officials did not bother to count the votes in awarding Richards the $500 man of the match award.