There were picnics at the beach and televisions in the park as Melburnians throughout the city celebrated a Cup Day like no other.

Local law officers and private security are bolstering the efforts of police along Melbourne beaches as thousands flock to the bay for a public holiday in the sun.

Many Melburnians traded a day at the Cup for a day out with four-legged friends of a different kind – with dogs the most popular accessory at St Kilda Beach. 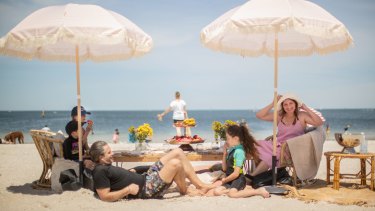 Dane and Megan Campbell with children Eton, Ruby and Violet enjoy a Melbourne Cup picnic like no other at Middle Park Beach.Credit:Simon Schluter

Light winds caused havoc for many as recently dusted-off umbrellas tumbled across the sand, with frantic beach-goers trailing metres behind.

Others basked in the welcome sun after months of COVID-19 restrictions, which temporarily outlawed sunbathing, as the temperature topped 28 degrees by 1pm.

Mr Cullen said the beach adventure may save him from an unsuccessful day on the punt. 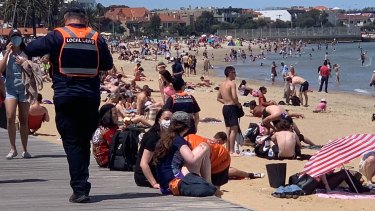 "Badly. That’s how I would’ve gone if I hadn't come here," he said.

Highway patrol police spent much of the morning checking cars on Beaconsfield Parade.

Dozens of beach-goers are defying alcohol bans along the St Kilda foreshore. Numbers swelled by 3pm, as the temperature closed in on 30 degrees.

Dom Barro, who has been attending the Cup every year since childhood, made sure he and his friends would get a prime spot to watch the race. 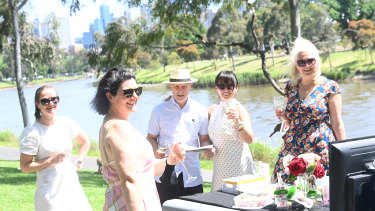 This year’s set-up includes a generator, a large flat-screen television and fluorescent speakers.

Dom even went so far as to pay a couple, using online outsourcer Airtasker, to arrive at their sought-after location at 6.30am to secure the spot.

"Come back at 4 o’clock, it will be vibe city down here," he said

Duncan MacDonald, 60, of Glen Iris, hasn’t missed a Melbourne Cup at Flemington for the past 25 years.

This year, his wife Cristina Ferguson and their friends Melinda Sutherland, Serina Dowding and Helen Vay have made their Cup encampment with roses, cut-outs of horses, a television and champagne flutes. 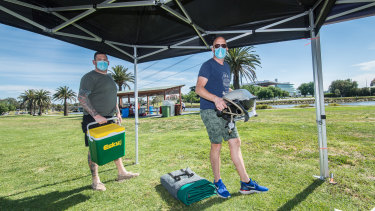 Brod Helmers and Keith Elshout setting up for a big day at Footscray Park, opposite Flemington Racecourse.Credit:Justin McManus

Cup fanatics Keith Elshout and Brod Helmers have traded their typical "suited and booted" spring carnival get-up for T-shirts and shorts in their first Cup in years spent outside Flemington Racecourse.

Elshout, 45, from Seddon, said they would usually secure a prime location at the track. But this year, alongside other keen punters, they’ve shown up to Footscray Park to secure a spot outside of the racecourse to hear the Cup called from across the Maribyrnong River.

Brod Helmers, 35, from Avendale Heights agrees it's an unorthodox approach to race day.

"We're out and about, mate, and everyone's safe and that's all that matters," he said.