When it came to announcing on Tuesday that his career was over, Shane Watson surely didn't need any practice.

The former Australian all-rounder was said to have been "very emotional" when delivering the news to his Chennai Super Kings teammates in the Indian Premier League. That underscored how all these years later – it's been more than 18 since he stepped out for Australia for the first time – he still enjoyed the camaraderie that came with the sport.

However, as one WAG joked, he shouldn't have had any trouble delivering the news for this was his fourth retirement. To those keeping count, he had retired from Test cricket after the losing 2015 Ashes series. Then came his farewell to international Twenty20 cricket a year later. In recent seasons he bade farewell to the Big Bash League. And, now, the final curtain. 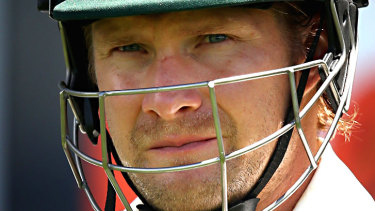 Seven months shy of his 40th birthday, Watson finishes having represented 28 "major" teams, including Australia, according to cricinfo. For a man whose durability had been an issue in his younger years – soft tissue injuries meant he had to pull out of the 2003 World Cup squad, while he was hurt on the eve of the 2006-07 Ashes series when Australia had hoped he would morph into the new Andrew Flintoff – Watson showed remarkable stamina. In this regard, he had the last laugh.

He capitalised on the franchise era that would have so suited the likes of Dean Jones and the Waugh twins of yesteryear. Here's hoping, though, he had the one superannuation account otherwise he has some chasing up to do.

He may have largely been off Broadway in recent times but could be found in Twenty20 competitions in the Caribbean, Bangladesh, Pakistan or, wait for it, captaining the Sindhis T10 squad in Pakistan. While the Australian cricket team has not been to Pakistan since 1998, Watson had no issue heading there.

He played 59 Tests, and was a key player for a time in the post-Ricky Ponting world. He had loved playing under Ponting, not so much under Michael Clarke whom he was deputy to. Watson handled Clarke's description of him as being a "like a tumour" – their issues re-emerging in 2016 – as an adult should. While he could carry a pained look, Watson's composed views were always worth listening to. 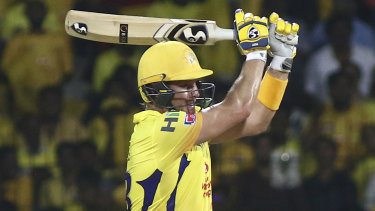 Shane Watson in action for the Chennai Super Kings. Credit:AP

Watson had power with bat in hand but it shouldn't be forgotten he played his best Test cricket as an opener, including a century in Melbourne in 2009. All up, he averaged 35.19 with four centuries and took 75 wickets at 33.68. Life as an all-rounder is a tough craft. Successor Mitch Marsh still hasn't shaped up, and it may soon be over to Cameron Green.

Of course, Watson will also be remembered for his troubles with the Decision Review System. He played across his front pad too often – he was trapped in front 14 times in Ashes Tests – and admitted to making too many "bad reviews". Something many a fan would agree with.

It's been some ride for a man who made his international debut against South Africa at Centurion in 2002. To put that in perspective, it was Ponting's first series as ODI skipper, at a time when Steve Waugh still had two years to run as Test captain.

Watson won't be lost to cricket because he remains president of the Australian Cricketers' Association. If anyone understands the modern game, it is him.