England were forced to resort to wiping sweat directly off the head of Jack Leach in pursuit of wickets on a dead Rawalpindi pitch.

Excitement for England’s first Test tour to Pakistan in 17 years has been somewhat abated by the wicket produced in Rawalpindi with supporters of the host nation bemoaning yet another lifeless deck for what could have been an enthralling match.

Having posted a mammoth first innings total of 657, England were forced to endure their turn in the field – with the bowlers forced to toil as much as Pakistan’s. 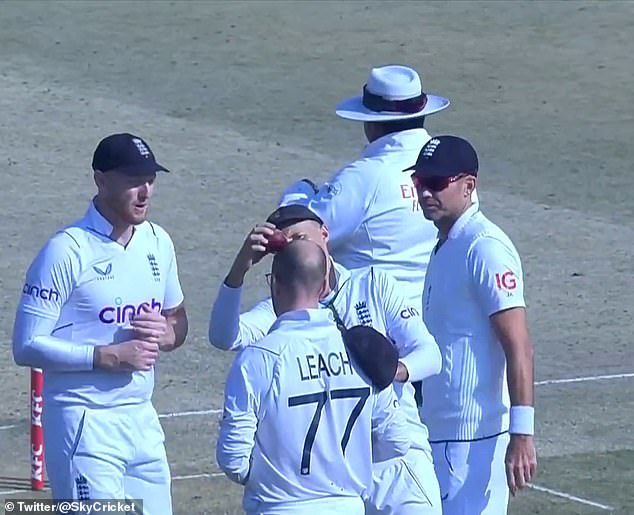 After removing openers Imam-Ul-Haq and Abdullah Shafique, England spotted the door slightly ajar and in a bid to get the ball moving, resorted to trying to draw the sweat – directly – off Leach’s head and onto the ball.

Saliva was the traditional method used by cricketers to try and get the ball to swing, but when Covid-19 struck the International Cricket Council (ICC) put a ban on players using spit on the ball.

Realising in that period that sweat was just as effective, that has been the chosen method ever since. Saliva continues to be banned. 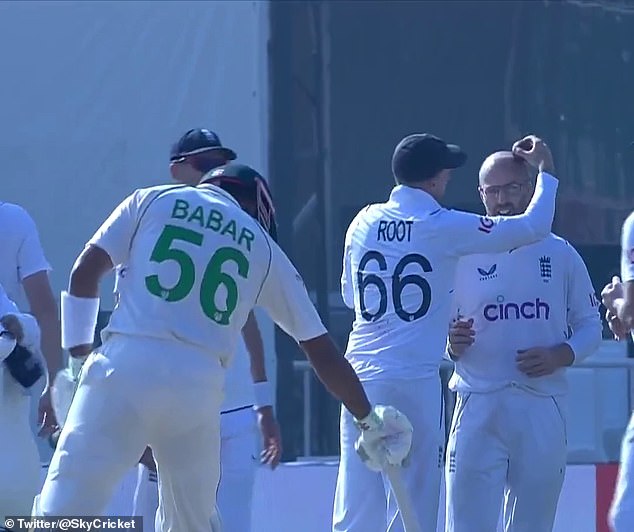 Going in search of wickets on a lifeless pitch, Joe Root rubbed the ball on Leach’s head

The host cameras picked up on former Test captain Joe Root running over to Leach, lifting his cap and rubbing the ball directly on his head.

The temperatures in Rawalpindi, unlike in Karachi, where they play the third and final Test, are in the low 20s, perfectly comfortable for England’s players and with little happening in the field, the were unlikely to have been over-exerted.

Test cricket has long been a game that rewards innovation – and England were rewarded for theirs when Leach trapped Azhar Ali LBW for 27 – the second lowest score of any top order batsman in the game. 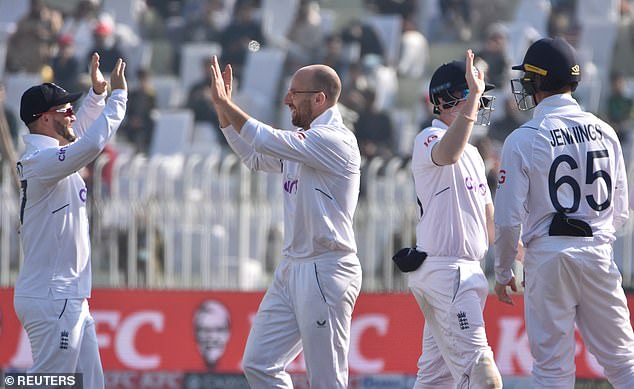 The incident came much to the humour of broadcasters David Gower and Nasser Hussain watching on, with the latter warning the former left-hand top order batsman ‘not to come near me’.

‘Don’t even look in my direction,’ Hussain told Gower.

‘It’s ingenious, absolutely ingenious,’ Gower responded. ‘Because you’re no longer allowed to use saliva, tests have apparently proven that sweat is much more effective in shining a ball than saliva, a relic of the Covid days.

‘Like you Nass, I’ve never actually thought of using that particular scalp as a way of sourcing the shine.’

Taking a well-earned break, Leach briefly escaped to the dressing room, with Hussain suggesting that he was ‘not having’ having had the ball shined on his head.