A revved-up Mitchell Starc and hometown hero Scott Boland brought the Melbourne crowd to its feet and put England back on their knees as Australia withstood a belated revival by the visitors to continue their charge to the urn.

Left-arm speed demon Starc came within inches of joining his fiercest critic Shane Warne in the MCG hat-trick club during a turbo-charged new-ball spell by Australia’s quicks which cut a swath through England’s brittle batting line-up late on day two.

It took just under an hour of high-voltage bowling for England’s stunned top order to cede all the ground clawed back by veteran paceman James Anderson and his wholehearted quicks.

As the shadows lengthened across the hallowed turf, the stands of the famous ground were heaving, the crowd of 42,626 anticipating a wicket with almost every ball.

“That was great. That was absolutely bouncing for 40-odd thousand, it felt like it was 100,000,” Melbourne-based batter Marcus Harris said. “When Starcy was on a hat-trick, it was unbelievable and when Scott Boland ran to bay 13, it was brilliant. That’s something you dream of as a kid to be a part of.”

Australia’s preparedness to pitch up to challenge the stumps and the outside edges of England’s batters was richly rewarded with four wickets in 12 overs. There was good reason why Ben Stokes held up play with his stalling tactics as he ambled to the crease. 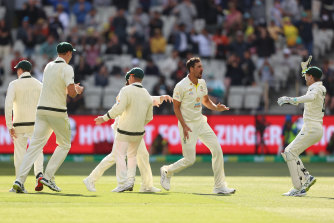 This year’s leading run-scorer faces a mammoth job to rescue his struggling team, which hobbled to stumps at 4-31, still requiring another 51 runs to make Australia bat again.

A disappointed Anderson bemoaned the poor performances from the team’s frontline batters.

“Again, if we’re being honest in the first innings we should have got near that [260] if not more,” Anderson said. “It certainly felt possible on that wicket. We knew it’s a new ball wicket, it felt like it did less as the ball got older and more sun got on the pitch it felt it did a lot less.

“We knew the last 12 overs would be tough with the new ball but even so to lose four wickets was really disappointing.”

The threat of COVID could yet save Root’s men from defeat on Tuesday, should the match be abandoned due to more positive cases, though it would only confirm Australia’s retention of the urn.

Yet again, England’s batters failed the test though better credentialed teams would have struggled to emerge unscathed from such an onslaught.

The MCG pitch, maligned four years ago for its lifelessness, has produced another engrossing contest between bat and ball, with 13 wickets falling for just 237 runs on a dramatic second day. 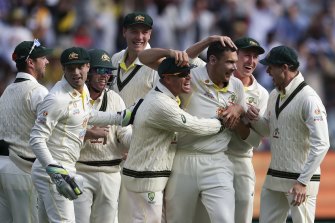 At the spritely age of 39, Anderson, a line-ball selection for this game, claimed four wickets, including the prized scalp of Steve Smith, who chopped on for 16.

England finally found a way to subdue both Smith and Marnus Labuschagne, the latter undone by Mark Wood’s extra speed, only for Marcus Harris to prove an unlikely stumbling block.

The opener booked himself a start for the next Test – wherever it is being played – but not the next series with an unconvincing yet invaluable 76, many of which were scored behind the wicket.

The luck which deserted the opener in Adelaide, when Jos Buttler spectacularly caught him twice and fluffed sitters elsewhere, was on his side here.

Technology came to his aid on 36, finding the nick onto his pads that umpire Paul Reiffel had not seen. He survived a stumping chance on 63 when Buttler, his feet anchored, could not take one down the leg-side with an outstretched glove off Jack Leach’s spin.

On another day, any of his more than 20 plays and misses could have found the edge of his bat before he eventually nicked James Anderson to Joe Root first slip, three runs short of his Test-best of 79.

Australia lost wickets at regular intervals but not in clumps. On other pitches, the long list of Australian players who could not capitalise on their starts would cause consternation, but here it prevented a collapse.

The tail again wagged, the final two wickets yielding 48 runs to give Australia a handy lead in a low-scoring game.