England erred on the side of caution after being invited to chase down 273 in 75 overs against New Zealand deciding against pursuing the win as the first Test at Lord’s ended in a draw.

New Zealand had set the game up on the final day by advancing their overnight 62 for two to 169 for six for a lead of 272, with Kane Williamson hopeful of tempting England in the final two sessions by declaring during lunch.

But a grandstand finish failed to materialise, with England defending resolutely in the face of some challenging bowling from New Zealand’s seamers on Sunday afternoon, meaning the teams head to Edgbaston next week all square.

Joe Root had been eyeing a clean sweep in this summer’s seven Tests – two against the Kiwis and five versus India – but his knock of 40 in an important 80-run stand with Dom Sibley went a long way to guaranteeing a stalemate.

That was agreed after England had trickled to 170 for three in 70 overs, with Sibley steadily growing in confidence after taking 20 balls to get off the mark to finish on an obdurate 60 not out from 207 deliveries.

First-innings centurion Rory Burns had earlier edged the deeply impressive Neil Wagner to slip for 25 while Zak Crawley had a flat-footed waft to depart for two, but Sibley and Root frustrated the Black Caps in a safety first approach that was perhaps somewhat well reasoned given England’s middle-order collapse earlier in the weekend.

The tourists upped the ante on Sunday morning in an attempt to push on although they lost nightwatchman Wagner when his attempted pull went straight up in the air and was pouched by James Bracey, handing Ollie Robinson a seventh wicket of the match to go with 42 runs in what has been an encouraging Test debut – on the field, at least.

Tom Latham was dropped by a diving Crawley at midwicket to deprive Broad, who snapped a streak of five consecutive innings without a wicket when he thudded one into the New Zealand opener’s back thigh pad for 36. 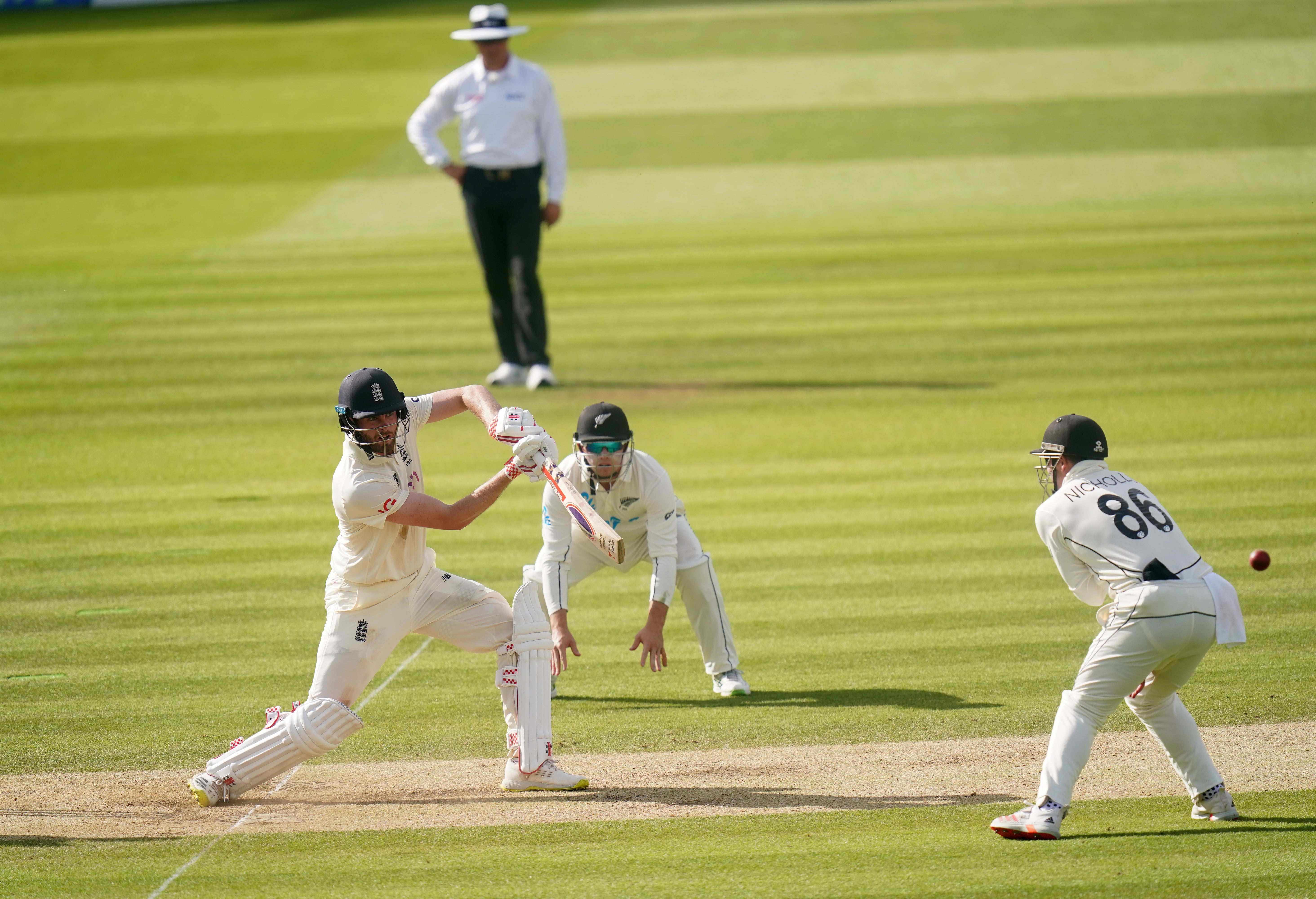 Ross Taylor deposited Robinson into the stands beyond midwicket before a streakier second six off Mark Wood over the slips. Wood had his revenge when he went wider on the crease, taking the outside edge before Bracey completed the catch diving to his right as Taylor fell for an enterprising 33 from 35 deliveries.

There was rain in the air as Root brought himself on to bowl, with the England captain getting himself in the wickets column when Henry Nicolls (23) gloved an attempted reverse sweep in to the hands of a diving Burns at slip. The shower then grew heavier, leading to an early lunch, during which New Zealand handed over to England.

But if England had designs on what would have been the third highest successful chase in a Test at Lord’s, it was not immediately apparent as Burns and Sibley were circumspect, with Kyle Jamieson bowling five successive maidens.

Sibley, on a pair after a first-innings duck, edged just short of the slips off the searching Jamieson before being struck on the elbow. He gained gradually in belief after flicking off his hips for four to get off nought.

Burns was twice rapped on the glove by deliveries that reared up alarmingly from Tim Southee, coming round the wicket and finding appreciable swing on a pitch that was offering a bit of uneven bounce. The England opener required treatment from the first blow while the second dropped short of second slip. 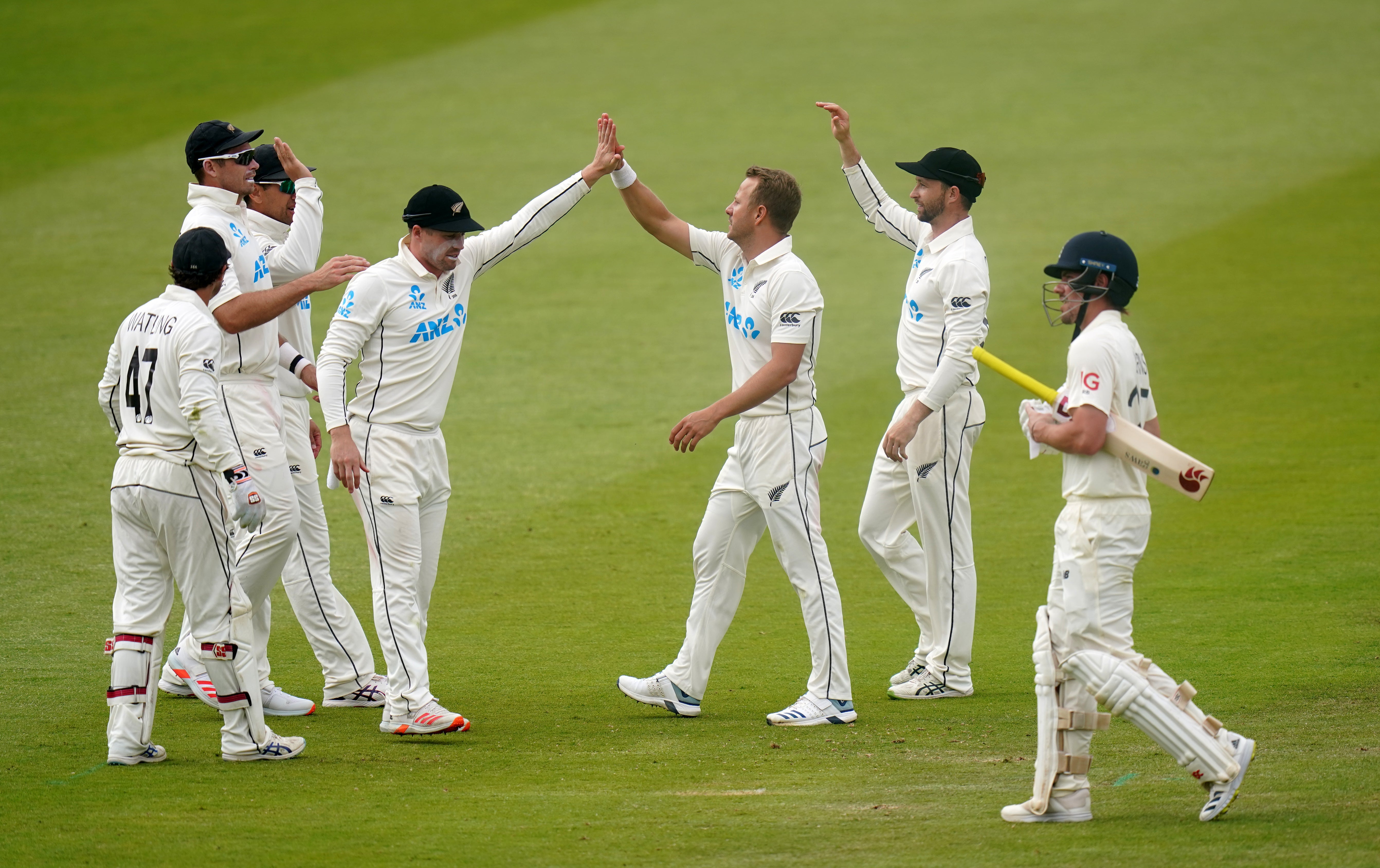 Burns’ luck ran out after Wagner found the outside edge, with Southee taking an excellent catch low down to his right. New Zealand then seemed to be in business when Crawley drove loosely at Southee only to edge to gully.

In between those wickets Sibley’s drive at Wagner just evaded the diving third slip but it was a rare mistake from the England opener, who stabilised the innings alongside Root, eschewing any risk either side of tea.

There were cheers from the 25 per cent capacity crowd when Sibley drove Mitchell Santner for England’s first four in 18 overs and they were equally vocal when Root clipped and then cut Jamieson for boundaries.

The indefatigable Wagner (two for 27 from 16 overs) was rewarded when he angled one in to Root’s pads but there would be no sting in the tail, with Sibley bringing up a 161-ball fifty shortly afterwards.

While there was an undercurrent of danger as Williamson kept his side on the field after 60 overs – the earliest point the match could end – Sibley and Ollie Pope (20no) stuck to their task manfully before handshakes just after 7pm.