I keep saying if England cannot bat, they will not win. The MCC recently said, in this politically correct world, that the word “batsman” should be replaced by “batter”. Well, our batters could not batter fish in a fish and chip shop.

England’s batsmanship has been exposed as embarrassing. This whole series has been about the poor standard of batting technique, lack of footwork, and judgment around off-stump about what to play and what to leave. They have lacked patience and sheer bloody-minded determination to make the opposition bowlers bowl you out with good balls. 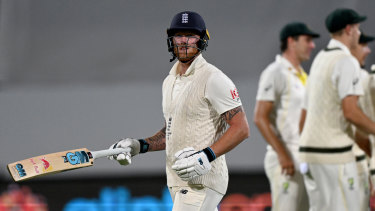 Ben Stokes departs after being dismissed by Mitch Starc on day three of the fifth Test.Credit:Getty Images

They have taken off-stump guards because they are not sure about their judgments about off stump. Why do you think I called it the corridor of uncertainty? It is because – and I do not care how good a player you are – if the bowlers bowl it on a decent length, around off and middle to four inches outside, the judgment of what to play and what not to play has to be perfect.

What to leave is as crucial as what to play. Exploiting that has been the foundation of so many great bowlers over the years, like Brian Statham and Glenn McGrath. Brian used to say he did not know whether it would move in or out from there – but as long as he put the ball in the corridor, it would be incredibly hard to play. He would not give you anything to hit, and just keep bowling it there. You have to bat on a guard where you can judge that corridor of uncertainty well. 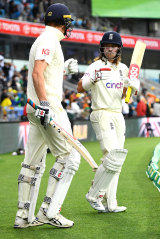 England openers Zak Crawley and Rory Burns walk out for their second innings during day three of the fifth Ashes Test in Hobart.Credit:Getty Images

If you are taking guard on off-stump and are getting bowled around your legs, like Ollie Pope was in Hobart, it cannot be right.

But there is no one rule for everyone. It is about what is best for you to judge that corridor of uncertainty, about what to play and what not to play. That is the most vulnerable area for every batsman when they start. Everyone is susceptible when they first go in because if you get it fractionally wrong, you are out.

What is paramount is where your eyes are – they need to be on middle and off stump. You have to find where that position is for your eyes. If you crouch – like Pope does, which is a problem – you will need to get further over towards the off side.

Whatever is normal and comfortable for people, they need to find what is the best guard where you can judge off stump and outside. If you cannot do that early in your innings, you are a candidate for failure, because that is where the best bowlers in the world are going to aim.

You can have all the shots in the world, like Pope does – but they are no use if you cannot stay in. He looks a good player at times, and then he does the most stupid things. It is all because he is worried about his off-stump and just outside.

Only two players have enhanced their reputations on this Ashes tour. One is a fast bowler, Mark Wood, the other a young kid, Zak Crawley, playing in the last two Test matches.

Wood’s pace unsettled so many of the Aussie batsmen, hitting them on the gloves, arms and body.

He got them out of their comfort zone, resorting to having a dart at hooking him and getting out.

He was a breath of fresh air and if he can stay fit, he will have lots more success.

Crawley’s batting at the end was a delightful surprise. Being tall with a big stride that helps him get to the pitch of the ball, he was a scoreboard mover, putting a bit of pressure back on the bowler. Against him bowlers run up thinking “if I do not get my length or line right he will punish me”.

He has a simple, orthodox technique with lovely timing. Please, Crawley, do not be a flash in the pan as we need a lot more from you.

“Only two players have enhanced their reputations on this Ashes tour. One is a fast bowler, Mark Wood, the other a young kid, Zak Crawley, playing in the last two Test matches.”

Then, there were a few players who did enough to keep their reputations. Jimmy Anderson and Stuart Broad had limited opportunities, but when they did play, they showed their quality.

Ollie Robinson was fine, but I just feel if he is going to be a factor abroad, he needs a bit more pace.

In his short international career, he has got away with “putting it there” and been lucky with a few bowler-friendly pitches.

More venom from his height would make him a real handful on any surface, like Joel Garner and Curtly Ambrose. To increase his speed, he must get fitter and leaner.

Jonny Bairstow’s century in Melbourne was top-notch. In and out of the team, being written off by some people, new guys getting the nod ahead of him for the first three Test matches – his career was going nowhere, so to come out and play like that with England again in trouble was tremendous. 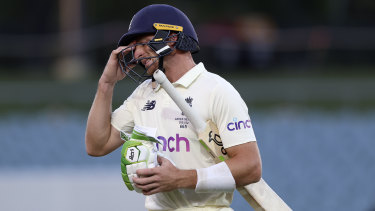 England’s Jos Buttler leaves the field after he is dismissed, hit wicket, during the fifth day of the Adelaide Test.Credit:AP Photo

Ben Stokes showed us glimpses of what he might do but, to be honest, there were mitigating circumstances why he could not perform. A lack of competitive cricket in England and no match practice before the series because of rain left him a shadow of the great batsman.

Then there were the flops. Jos Butler dropped catches and his batting was dreadful. Early on, his feet were all over the place, leaving him too far away from the ball when it was around off stump.

He was caught at cover from a leading edge poking at the ball and then whacking it to deep midwicket as soon as he came in.

Buttler is great against ordinary bowlers, but against top-class bowling he was found out.

Haseeb Hameed, I am sad to say, has not got it. No matter how decent he looks in the nets or in county cricket, he has struggled and will struggle at international level playing like he does in a straight line.

Rory Burns is ugly to watch. If that is the best of what English cricket has to offer, then God help England. His technique you would not give to a friend.

The guy has tremendous determination and guts. I take my hat off to him and full credit for everything he gets out of his batting, but England need to find someone better.