Eventually it was bound to happen.

After seven series against four countries over 10 months, Cricket Australia’s chief executive Nick Hockley awoke Friday morning to multiple missed calls. All indicated the Australian team’s carefully-laid plans had been temporarily derailed by the presence of a COVID-19 case in their midst. 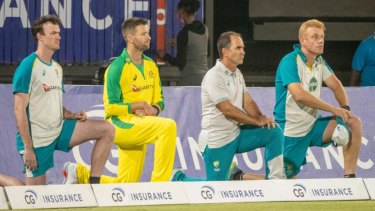 The Australian team takes a knee before a T20 clash with the West Indies.Credit:Cricket Australia

The positive test result among the West Indian support staff in Barbados, later clarified to be a historic case still shedding non-infectious fragments of the virus, not only brought the ODI series to a shuddering halt a matter of minutes before play. It also rammed home the good fortune underpinning last summer, and how the invasiveness of the Delta strain and a slow vaccination rollout have left Hockley crossing his fingers that this Ashes summer will be able to take place amid greater freedoms.

Hockley was a close observer of this year’s European football championships. For games played at London’s Wembley Stadium, attendees were required to present a vaccine passport, a negative COVID test result, or to submit to one of the numerous short-turnaround testing booths arrayed around the venue before being permitted entry.

“That’s something the whole of the event industry is looking at really carefully,” Hockley told The Age and the Sydney Morning Herald.

“We all want to get back to major live events, be they sporting or entertainment as quickly as possible, in a safe manner and in a way that gives the public confidence.

“I was really buoyed to see, whether it was Wimbledon or the European Championships, people getting back out at large events. We’re relatively fortunate here that there’s lower incidence (of COVID) in the community and there’s a great understanding that we all need to get vaccinated. Hopefully that means we’re all getting back to live events as quickly as possible. We’re following that very closely.”

The consequences for a tighter alternative are many. Already there are noises out of the UK that few players will be willing to commit to a full Ashes tour immediately after the Twenty20 World Cup in the UAE if they are not joined by their families. Australian players and staff, too, are lobbying for far greater access to their partners and families this time around.

“We all want to get back to major live events, be they sporting or entertainment as quickly as possible, in a safe manner and in a way that gives the public confidence.”

“We’re hopeful that, come the summer, we won’t have to do really tight lockdown bubble type arrangements, but if we’re in that position then that’s something the players I think understand and are getting used to,” Hockley said. “But fingers crossed come the summer, we’re going to be back to a level of normality. The protocols will be fit for the particular scenarios we find ourselves in.”

Then there’s the balance sheet. Bubbles, hubs and a costly COVID-19 venue dance slugged Cricket Australia somewhere in the region of $50 million last season, leading to plenty of internal questions about sustainability. The fact that only around 13 per cent of the Australian population is fully vaccinated as of late July has sharpened them.

In the meantime, sacrifices are made as a matter of course. In the Caribbean, the West Indies’ subsequent T20 International series against Pakistan has been shaved by one match to accommodate the delayed game three of Australia’s ODI series, while in Bangladesh, players and staff will miss the Islamic festival of Eid al-Adha in order to adhere to a pre-series quarantine period of 10 days.

Had any members of the Australian touring party returned positive tests, there were plans for two members of support staff to remain with them in the West Indies while they recovered, before the group travelled home together via commercial flights. What had not been determined was how many positive cases it would take for the whole squad to remain in place rather than splitting up. A negative COVID-19 test is a prerequisite for all players boarding the charter flight to go on to Bangladesh.

“Everyone understands the importance of continuing to play international cricket,” Hockley said. “So if there are circumstances where people are not able to meet the protocols, that does mean players sitting out. There are several Australian players who haven’t been able to tour, whether through injury, through family commitments and the like, and that is part and parcel of international touring at this time.”

As with most issues prevalent in Australia right now, it all comes back to vaccines. Without a fully-inoculated touring party, Australia would not have a team in the West Indies, nor be sending it on to Bangladesh. Without a significant vaccinated population within Australia by summer, CA will spend a second consecutive season ducking and weaving.

“The fact everyone’s fully vaccinated gives us greater reassurance that people are not going to get seriously ill,” Hockley said. “That’s the primary difference as to why we’re able to conduct these tours in the West Indies and Bangladesh as compared to the tour to South Africa in March, which obviously had to be postponed.

“Double vaccination of the entire touring party, including all our support staff, coaches and physios, gives us a much greater degree of confidence.“