Cricket Australia has dodged a major bullet with Channel Seven awarded only a fraction of the broadcast fee reduction it was seeking, but the network has warned it will continue to fight.

Faced with a potential financial disaster in the wake of the COVID-19 pandemic, CA has escaped with just a $5.3 million reduction from the $70 million the broadcaster was seeking to recoup from its annual $82 million cash-and-contra deal for the pandemic-affected season, according to a finding from an independent arbitrator announced to the ASX on Friday. 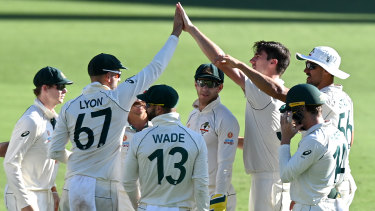 Cricket Australia has had a win with just a small reduction in broadcast fees for the just completed summer.Credit:Getty

The sum will be deducted from the next scheduled rights fee payment on Monday.

Though there are provisions for Seven to recoup a further $3 million should next season’s Test against Afghanistan not go ahead, but it is a positive development for the game in its ugly stoush with its free to air TV partner.

This had been the figure stated in the draft determination, first reported by the Herald and The Age last month.

The warring parties are due to head to the Federal Court on Monday as part of Seven’s preliminary discovery action.

Against the odds, CA, which invested some $30 million in its biosecurity plan, honoured its pledge to stage a full international and Big Bash League season despite several outbreaks of COVID-19.

Seven, however, has indicated it may not accept the ruling from the Australian Centre for International Commercial Arbitration, having previously said the finding would be binding.

“Seven West Media has to date reserved and continues to reserve all rights concerning the expert not having met fundamental contractual conditions of independence under the media rights agreement,” Seven said in a release authorised to be given to the ASX by Seven chief James Warburton.