‘It doesn’t matter what bowlers you play if you’re out for 140’: Stuart Broad takes aim at England’s brittle batting after targeting ANOTHER go at the Aussies himself at age of 37 in 2023

Stuart Broad once again proved a point at the SCG after being left out on the two Ashes pitches that should have suited him most to take his 19th five-wicket haul in Test cricket. Then he set his sights on taking on Australia one last time next year.

Broad, overlooked at the start of this Ashes in Brisbane and then again in Melbourne as England crashed to a decisive 3-0 deficit, took five for 101 on the second day in Sydney as Australia piled on another potentially match-winning score of 416 for eight declared.

Then he talked of how the passion still burns within him, was brutally honest about the batting flaws that have cost England dear and appeared to criticise England’s flawed long-term planning by saying how they must start concentrating on the here and now. 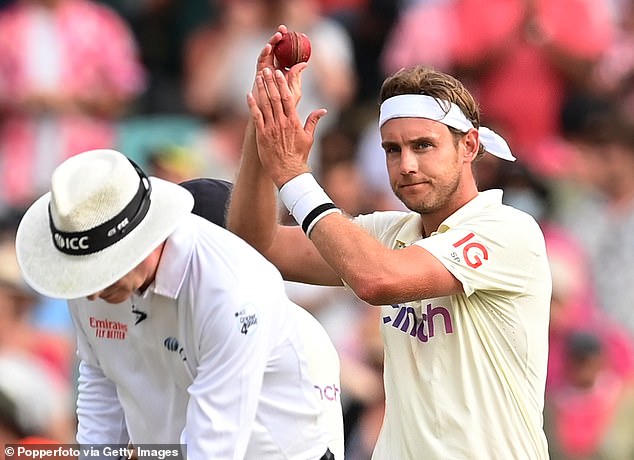 Stuart Broad (right), 35, insists he still has a ‘burning desire to play’ Test cricket for England

‘I’ve still got a burning desire to play,’ said Broad after his eighth five-for against Australia. ‘I must admit a few years ago I was umming and aahing about playing on and talked to my dad a lot of times about it.

‘He has a great belief that you should play the sport you love for as long as you can. The famous saying is you’re a long time retired. While the fire burns you should play because nothing replicates it in life. Nothing can bring you the satisfaction, pain and the highs and lows. They are quite addictive.’

Broad, 35 and now in his 101st Test, chose his words carefully on his future in his Mail on Sunday column last weekend but with another impressive display behind him said he wanted to play on in the tour of the Caribbean in March and beyond.

‘Absolutely. I still feel really hungry to perform,’ he said. ‘Jimmy Anderson and I talk a lot and he does inspire me in how focused he is on delivering.

‘But instead of looking forward to what’s coming next year or the next Ashes there’s a mindset in the group to get back to the basics of what’s ahead of us right now, how we are winning this next Test, because sometimes when your brain is focused on what’s in front of you, you are not concentrating on delivering in the next Test match. 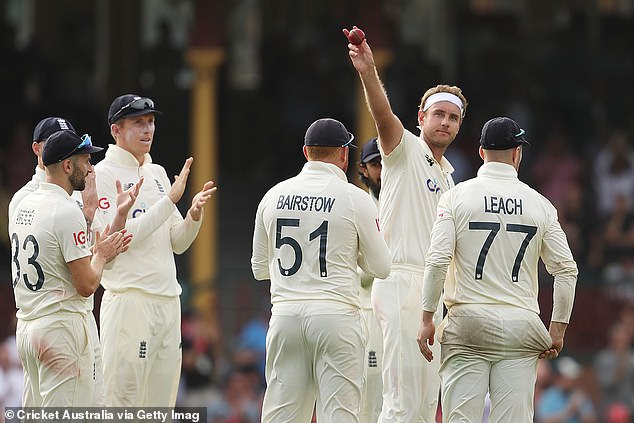 ‘We don’t know what the world will look like in June or November but can we go out and take the next opportunity in front of us? That should be the focus of the England team going forward. It’s all very well looking to the World Test Championship or next Ashes but if you don’t win the battle in front of you it’s all irrelevant. We need a short-term mindset for the next couple of games because there are points to prove.’

But Broad did look ahead to another home Ashes and the chance of avenging this tour in 2023. ‘It’s realistic, yes absolutely,’ said Broad. ‘Jimmy is 40 in the summer and he’s the most professional I’ve seen him in the last few years. It sets a guideline of how to approach it. I saw a stat somewhere that Jimmy is averaging 21 or something since he was 35.

‘Why can’t I replicate it? I’m not as skilful as Jimmy but I feel like I’ve got the motivation and drive and feel like I can contribute as much as Jimmy has since that age. Jimmy is a driving force behind my mindset and hopefully I’ll get to play a lot more Test cricket with him.’

And for all the talk of England making mistakes with their selection in this Ashes, Broad laid the door for their disastrous defeat squarely on the batsmen. 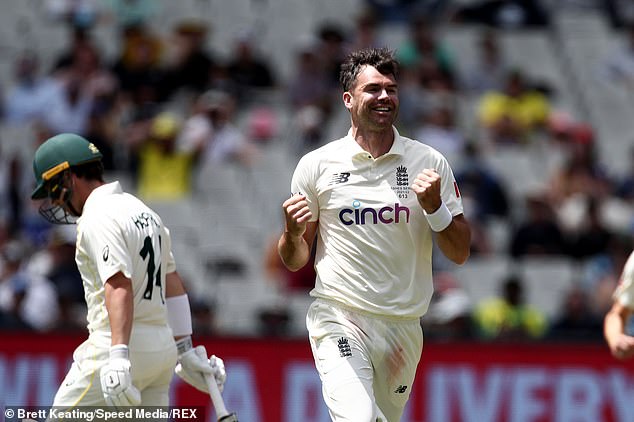 ‘We’ve got an opportunity tomorrow and I hope someone is sat here tomorrow having scored a big hundred and answering positive questions. Honestly, it doesn’t matter what bowlers you play if you’re being bowled out for 140. It might be a bit brutal but that’s the truth in Test cricket.’

One of England’s greatest bowlers admitted he has been more philosophical about being left out in the first and third Tests of this Ashes than when he reacted angrily to being dropped ahead of the home series against West Indies in 2020.

‘I felt then in Southampton that I’d bowled really well in the Ashes in 2019 and then in South Africa and then I didn’t play the next game when I felt the shirt belonged to me. That’s what disappointed me in that instance. If I felt then “I don’t really care” I would probably have made a different decision but I did feel really annoyed at that.

‘It grew a lot of desire in me. But when I arrived in Australia the shirt wasn’t mine because I’d got injured in the India series and the bowlers bowled nicely. I can’t have the same disappointment as when the shirt belonged to me. 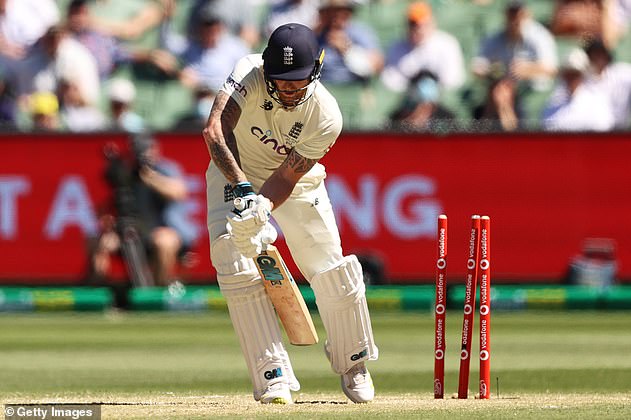 ‘I said to Joe Root and Chris Silverwood at the Gabba that I was disappointed to be left out because the pitch had me licking my lips but the shirt wasn’t mine and I couldn’t change it.

‘It was guys delivering well when I wasn’t around. I respect that about the decision making. No Test cap should just be handed out. They have to be earned. And I feel I’ve put work into this trip which earned today. I would have put more of a stamp on it had I taken five for 30 but maybe there will still be time to do that.’

England just about survived 20 minutes until the close of the second day unscathed – Zak Crawley was reprieved on nought after being caught off a Mitchell Starc no-ball – and will see on the third day the extent of the side injury that stopped Ben Stokes bowling.