Right to the last, England’s captain Joe Root hoped for a miracle. Fifty-one runs in deficit with only six wickets left, he was perhaps sustained by the sight of the miracle worker himself, Ben Stokes, at the other end.

But after a couple of meaty blows, Stokes was blown away by Mitchell Starc’s speed and seam, bowled as comprehensively as it is possible to be. The rest melted away in the face of Scott Boland, in a debut scarcely believable until it was weighed up against his remarkable recent MCG record. 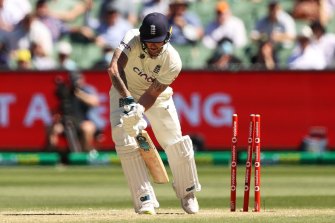 Ben Stokes is bowled by Mitchell Starc and Joe Root’s last hope of an Ashes miracle goes with him.Credit:Getty Images

“I’m absolutely gutted, bitterly disappointed,” Root said afterwards. “You turn up today, you walk out with Ben Stokes and you feel like anything’s possible. You can look at last night all you want, or today. But that first innings, having batted on that wicket, I thought 250-270 would have been a very good par score on that surface.

“When it was doing as much as it did, you would have been very much in the game, and you’re looking at a very different game again. I think last night was an outstanding spell of bowling from their attack, and you’ve just got to find a way to get through it with an hour’s hard graft. Really battle hard, be none or one down, and then you’re looking at a different game.

“We knew that going into the day we were more than capable of getting ourselves to a score with the players that were to come in and at the crease, and it’s really disappointing that we didn’t manage to do that.”

At the end of one of the greatest years of Test match batting in the history of the game, Root is almost completely without rewards for it. Series losses to India (twice), New Zealand and now Australia have left him with a feeling of emptiness, admitting he would trade all those 1708 runs for a few more Test wins than four out of 15 for the year.

“Any player will tell you that there’s no better feeling in cricket than winning a Test match,” Root said. “I feel like my game is improving, and I’m evolving still as a player, even having played quite a lot of cricket. And I’m desperate to keep doing that. But it’s been a very tough year for a number of different reasons.”

“Any player will tell you that there’s no better feeling in cricket than winning a Test match.”

That the year ended in Ashes defeat and questions about his future rather summed up how tough it has been for Root. But he stuck rigidly to focus on the next two Test matches rather than entertaining any thoughts about whether, after 58 matches in charge, it was time for a change.

“The series isn’t over yet. We’ve got two very big games and, more than anything, it’d be wrong to look past that,” Root said. “We’ve got to make sure we come away from the tour with some better performances and a win or two under our belt as well. My energy has to be all about trying to win the next game. I can’t be selfish and start thinking about myself.

“I think more than anything you’ve got to keep looking to do everything we can to get the players in the best possible place to go and win Test matches. That’s a big part of captaincy – you’ve got to ready the players, try and instil that belief in every single one, of your team and your squad. More than ever now, going into the last two games.”