Cricket Australia is looking at implementing interchangeable hubs between the national side and the Big Bash League in an initiative that addresses Seven West Media's concerns over the standard of the competition, as fears mount Perth may be a no-go zone for top level matches before Christmas.

BBL boss Alistair Dobson is confident CA will get clearance from state governments for a freer movement of players, possibly reducing the need for super-sized national squads and allowing more top-liners to play in the Twenty20 league. 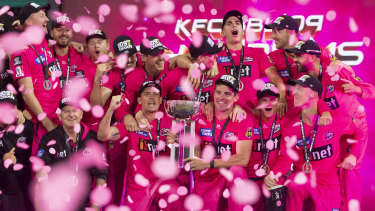 It comes as Dobson confirmed a report by the Sydney Morning Herald and The Age that this summer’s tournament would be turned into a travelling roadshow, with "villages", CA's term for hubs, to be taken around the major centres and marketed as a "festival of Big Bash".

Even as the national men’s team played its first match since the onset of the pandemic, there remains great uncertainty what shape the home summer will take as the game sweats on clearances from state governments.

The plans for Perth to kick off the international season with a suite of white ball games against Virat Kohli's side followed by a historic Test against Afghanistan are now under a cloud due after the West Australian government's refusal to join the rest of the country in opening borders by Christmas.

If Perth is off the table, Adelaide and south-east Queensland will host those games, a source familiar with the issue has indicated.

The BBL was scheduled to start on December 3, the same day as the first Test against India, but that is expected to be moved back. CA, however, still want the tournament played through the school holiday period and was not looking to move the final later than its planned date of February 6.

The ability for players to switch to and from national to BBL hubs would help address Seven's fears of a substandard tournament. Seven West Media chief James Warburton recently likened a diluted BBL to grade cricket in an extraordinary attack on the game.

CA are also looking to move the limited-overs series against New Zealand, scheduled for late January, which would avoid a clash with the BBL.

"You'll be able to transition at different times. It's about creating the right biosecure environments in each team, be it the national team or the BBL village if you like, that relevant authorities and medical experts feel like it's a safe transition," Dobson said.

The movement, however, would be tighter than pre-pandemic times when players could be brought into the national squad at short notice.

"I certainly wouldn't expect like in the past where you can bounce back and forward between the two," Dobson said. "We've got the best in the business working on that, really confident we'll be able to get a good outcome."

There is a view in some sections of the game that state politics rather than the pandemic is the greatest problem in delivering the $300 million season. Queensland is due to go to the polls in October, and WA in March.

CA have not received guarantees from the WA government their players will be able to quarantine in Perth upon return from the tour of England in less than a fortnight, and the Indian Premier League.

CA want players to be able to complete a "soft" quarantine which would enable their pacemen to continue training and maintain their bowling loads during the 14-day period.

"Whether we have cricket or not this summer will absolutely come down to whether our government allows it or not."

While BBL critics say the tournament is in decline, CA point to a third year in a row of 1 million-plus attendees and an average of 180,000 more viewers per game on TV than the AFL and NRL as evidence of its strength.

"[We're] really proud of where the BBL is. We know we need to continue to improve and find ways to continue to make the product as strong and healthy as possible," Dobson said.

"We've spoken a fair bit about things we need to focus on after last season. We're really optimistic and excited about the season coming."