Australian batting plank Beth Mooney has declared her world champion side has unfinished business, and is keen to be remembered as one of the greatest teams of any sport.

Mooney on Saturday night muscled her way among the stars of the game when she claimed a maiden Belinda Clark award, recognising her as the best Australian women’s player of the past year. 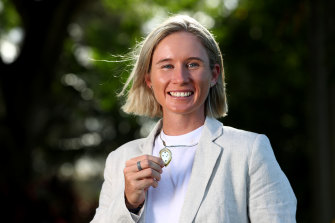 High-profile teammates Meg Lanning, Alyssa Healy and Ellyse Perry had dominated the award since 2014 but Mooney’s superb year, in which she was dominant through the winning home Twenty20 World Cup campaign, was due recognition.

It also completed an assertion coach Matthew Mott said “four or five years ago” to Mooney that she could become one of the best batters in the world if she applied herself more.

“We certainly have some players in the Australian side at the moment that will be remembered for a long time as some of the best we have ever produced,” Mooney said.

“To be playing alongside them, let along being up on a honour next to them for winning this award, is a pretty surreal thing.“

Through the voting period, which comprised Twenty20 and one-day internationals, Mooney crunched 555 runs at 42.69, with six half-centuries. This included an unbeaten 78 in the T20 World Cup winning final against India at the MCG.

Memories of that 85-run win over India in front of more than 86,000 fans at the MCG came flooding back during the virtual event on Saturday, the tournament completed on the cusp of the coronavirus lockdown.

The Australians have not been in action since the home white-ball series against New Zealand in October, and are keen to again meet the White Ferns in three Twenty20 internationals and three one-day internationals in New Zealand from March 28, the series giving them the chance to claim a record 22-straight ODI wins. They currently share the record with Ricky Ponting’s 2003 men’s team.

“Our goal within the Australian team is to be one of the greatest team’s ever to have played the game, or any game.”

“Our goal within the Australian team is to be one of the greatest team’s ever to have played the game, or any game,” Mooney said.

“For us, it’s no different when we head over to New Zealand. We, obviously, want to play in those series and win and have a real impact.“

The Australians have not been in New Zealand since 2017, and this series will give the side a chance to adjust to conditions ahead of a return in March-April next year for the ODI World Cup.

Queenslander Mooney was also crowned the T20 player of the year, claiming 30 votes through the voting period between January 9 last year and January 19 this year, well ahead of Healy (18).

Vice-captain Rachael Haynes (11 votes), with 222 runs at 74, was named the ODI player of the year, nudging Lanning (10) and Wareham (6) There were only three matches in the voting period – the home campaign against New Zealand.