Manchester: A stellar performance by Josh Hazlewood has secured Australia a 19-run win in their first one-day international against England, his 3/26 from ensuring that the visitors defended their 8/294, made possible by a timely 126-run stand between Mitchell Marsh and Glenn Maxwell.

The opening bowler picked up Jason Roy and Joe Root in quick succession, the former removed via a brilliant one-handed reflex take in his follow-through, to stifle the typically brutal English top order. At one stage, he had 2/5 with three maidens to his name after six overs, the hosts restricted to just 2/22 in their power play with Jonny Bairstow limping to ten from 30 balls. 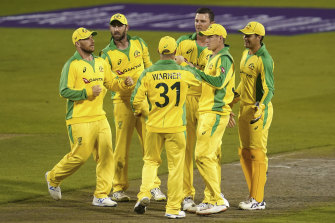 Australia’s Josh Hazlewood, third right, celebrates with teammates the dismissal of England’s Moeen Ali during the first ODI cricket match between England and Australia, at Old Trafford in Manchester, England.Credit:AP

When Adam Zampa enticed Eoin Morgan into a false stroke on 23, hitting the legspinner down the throat of Glenn Maxwell at deep midwicket, then won a top edge of dangerman Jos Buttler (1) from the first ball of his second over, Marnus Labuschagne completing a terrific diving catch at long on, England were reeling at 4/57 in the 17th over.

But alongside Sam Billings, in at number six, Bairstow finally found his groove and cleared the ropes four times as the partnership passed 100 and threatened to undo the earlier good work of Aaron Finch’s bowlers. Sure enough, it was Hazlewood again contributing to the breaking of that problematic stand, completing another fine diving snaffle at deep midwicket to give Zampa a third, the opener gone for 84, leaving 125 still to make in 89 deliveries.

It was also Hazlewood who landed the final and vital hammerblow, the wicket of Moeen Ali (6) coming in his final over to leave Billings too much to do with the lower order, out on the final ball of the night for 118 from 110 balls, his first international century. When the 50 overs expired, the world champions were 9/275. Zampa added Chris Woakes to his bag, finishing with 4/55, the best ODI figures for an Australian wrist spinner against England.

Earlier, Australia were in early strife themselves at 5/123 in the 24th over when Marsh and Maxwell came together. To that point, David Warner (6) was bowled by Jofra Archer beauty, Finch (16) edged Mark Wood’s and Marcus Stoinis (43) did likewise before Marnus Labuschagne (21) and Alex Carey (10) were both deceived by Adil Rashid. Morgan’s decision to insert the Australians on a sluggish tracked looked a good one. 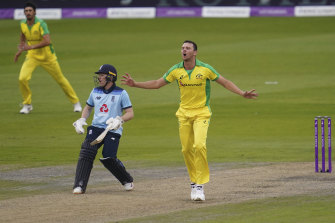 Australia’s Josh Hazlewood, right, reacts after bowling a delivery to England’s Jonny Bairstow during the first ODI cricket match between England and Australia.Credit:AP

But the steady build between the pair neutralised the constant challenge posed by Rashid, their 100-run partnership raised in 102 balls – all the more important given Steve Smith’s absence, ruled out after being hit on the head at training on Thursday. Passing 50 in 43 deliveries, the enterprising Maxwell then exploded, launching Archer for consecutive sixes to begin the 44th over. The Victorian chopped on for 77 from 59 but the platform was laid at 6/249.

Marsh was Archer’s third victim, leg before wicket for 73 from 100 balls in the 47th over, but by then his job was also done having steered the ship out of the earlier troubled waters. The captain was especially thrilled given Australia’s need for stability in the middle order.

“It was a great partnership,” Finch said after the win. “I thought they paced it really well. They went to attack and to soak up some pressure and then played two smart and mature innings. I’m really happy for the two of them to both get some runs.”

Mitchell Starc then stuck the landing, hitting a six off Chris Woakes to finish the innings, contributing a handy unbeaten 19 from 12 balls. When bowling later, the left-armer picked up a groin niggle but was fit enough to complete his allotted overs at an economy rate of 4.7.

Billings took his time to warm-up alongside Bairstow in England’s middle overs but put the foot down in the final ten overs, scoring the majority of the 85 runs the hosts made in the final ten overs. The 29-year-old’s century was raised in 101 balls, finding the boundary 14 times and clearing it twice. It wasn’t enough to drag them over the line after the dreadful start to the chase, but it lays an important marker against Australia’s quality attack.

“England’s have been the form top order over the last three or four years so it is a good measure of where you are at,” Hazlewood, the player of the match, said. “It was good fun to bowl eight up front and test myself physically too. It’s a simple game for me to just try and hit the top of the stumps and if they want to move around and play a few shots then go for it. But I stick to my plans.”

Asked whether he was still hurting at being left out of Australia’s World Cup squad last year, the 29-year-old said that was all in the rear vision mirror. “It was right up there for me,” he added when addressing whether this was the best he has bowled in an ODI. “I have got a couple of five-fors but I think against this line-up and this top order to bowl that well on this wicket, I’m very happy with how it was coming out."

The three-game series continues on the same Old Trafford pitch on Sunday.