David Warner has left the door ajar for a final Ashes showdown with Stuart Broad in England in 2023, in what would almost certainly be his baggy green curtain call should he get that far.

Next summer is looming as Warner’s swansong on home soil as he eyes bucket list items abroad before drawing stumps on one of the finest, and most controversial, Test careers by an Australian in the modern era.

The veteran has defied Father Time this year, proving his critics wrong to spearhead Australia to achieve their two primary goals this season – a maiden Twenty20 world title and Ashes glory.

Warner, on 89 Tests, would dearly love to join the exclusive 100 club – a milestone he is on track to reach at home in 12 months’ time, perhaps even on Boxing Day, should his rich vein of form continue on the tours of Pakistan and Sri Lanka. But it’s team success he is craving.

“Winning the Ashes here was a big one,” Warner said. “We still haven’t beaten India in India, that would be nice to do. England away, we had a drawn series, if I manage to get that chance and opportunity I might think about going back.”

It is far from certain he will reach the 2023 Ashes, particularly if horses for courses remains in vogue with selectors. 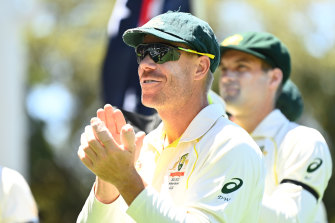 David Warner would love another chance to win the Ashes in England.Credit:Getty

England has not been a happy hunting ground for Warner, who was part of Ashes defeats in 2013 and 2015 before coming agonisingly close in 2019 when he was comprehensively beaten by Broad. Dismissed seven times in 10 innings by the England seamer, the left-hander managed just 95 runs.

He will be 36 when Australia return to England – and Broad 37 – though by then he may have retired from international Twenty20s after next year’s title defence at home. That James Anderson can still make an impact at the age of 39 is giving him optimism.

“James Anderson sets the benchmark for older guys these days. We look up to him getting on in our days,” Warner said.

“For me, it’s about performing to the best of my ability and putting runs on the board. The first two Tests I actually looked like a proper batsman, almost like I played my career the other way.

“I had to knuckle down and respect the bowling, the line and lengths they were bowling. The hundred eluded me [in Adelaide]. I started at the World Cup, moving on into the Ashes and hopefully [can continue] for the next 12 months.”

The tours to Pakistan and Sri Lanka are important not just to Pat Cummins’ dreams of lifting the world Test championship trophy but to Warner’s aspiration to conquer India in India. That series is likely to take place early in 2023 before the Test final later that year.

“Those tours will really show where we are as a team and our character,” Warner said.

“When you go to the subcontinent you could potentially be playing two spinners and selectors look at the batting line-ups with who they feel is going to be better on those subcontinent wickets. There’s going to be some brave decisions being made. We’re looking forward to that.

“There’s a new world Test championship we’re playing for. Each game has its merit, and we’re excited.”

Australia’s pace stocks are strong, as seen by match-winning performances from newcomers Jhye Richardson and Scott Boland, and team spirit is high now that the atmosphere within the camp is no longer as intense.

Warner is excited to see his opening partner Marcus Harris among the runs in the Boxing Day Test after a long run of outs left his place in the side in jeopardy.

“He’s a tough, tenacious fella. We gel well together when we’re out there – a minor hiccup last game but that’s what can happen in cricket,” Warner said, referring to the runout in Adelaide.

“His courage to keep fighting and working ways out to score runs when bowlers are bowling good lines and lengths, he fought it out really well and I’m really pleased for him.”