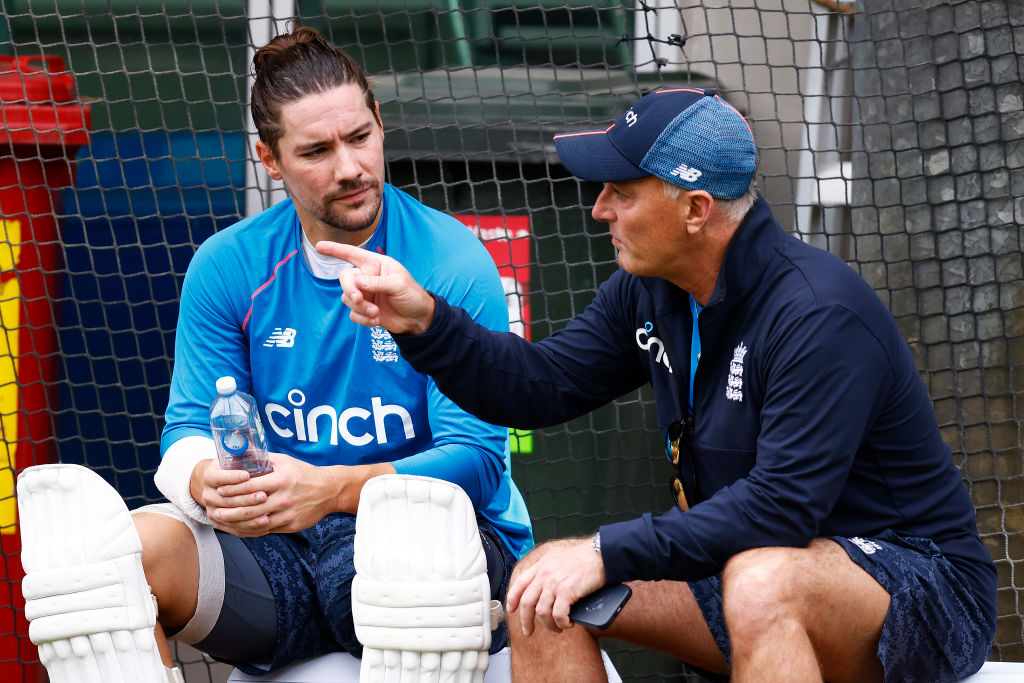 Batting coach Graham Thorpe has admitted that England’s batters have been handed a ‘wake-up call’ during the opening three Tests of the Ashes series against Australia.

England have suffered heavy defeats in each of the opening three Tests of the series in Brisbane, Adelaide and Melbourne and are playing for pride in the final two matches scheduled to take place in Sydney and Hobart.

While the visitor’s bowling attack has also struggled, it’s their batters that have taken much of the criticism after they failed to score in excess of 300 in any of the opening six innings of the series.

Joe Root’s team made two changes to the batting line-up for the third Test, with Ollie Pope and Rory Burns missing out in favour of Zak Crawley and Jonny Bairstow.

But that did not change their fortunes as they were blown away for an embarrassing 68 in their second innings to lose by an innings and 14 runs.

And Thorpe has admitted that England’s batters were in need of an education, but hopes that their current struggles will in turn help them to become better players in the future.

‘We are trying to still educate some of the younger guys into the rhythm of Test match batting, playing situations in the game, doing it for long periods of time. Some of them haven’t been able to do it yet,’ he told the Evening Standard.

‘Some of our young players are getting an education and if they didn’t know before, they understand how tough Test cricket is. Not just on the field, but off it.

‘With some players it’s a wake-up call and could actually kickstart their careers because they’ve started training a very, very different way. They actually really start to train smart, they don’t waste time fluffing , hitting half-volleys.

‘I don’t mean that in a bad way but they actually deal with the nitty gritty side of international cricket; playing high-quality spin, high-quality pace bowling, learning how to put pressure back on, and learning situations.

‘Confidence gets hit when you don’t perform, and we haven’t got enough runs on the board. Collectively, we’ve not performed the way we want to. We can throw excuses around as much as we want. It would have been lovely to have had state matches, or for the weather to have been ideal.

‘You put this in context: do England come here and win series consistently in Australia? No we don’t. So everything has to be quite well aligned for us to do well and to compete and really be in the game.

‘We are trying to still educate some of the younger guys into the rhythm of Test match batting, playing situations in the game, doing it for long periods of time. Some of them haven’t been able to do it yet.

‘They have done some good things in Test cricket, then been bumped with playing three of the best teams in the world – India, New Zealand, Australia – in their home environments.’

Meanwhile, Thorpe has explained the conversations he’s had with Burns about what he can do to get back into the XI.

‘Like any player they get to a point and I said you’ve played 30 Test matches and you average 30,’ he said. ‘So we want you to be doing more, to be better than that as a player. So we’ve had discussions with him – does he need a major overhaul of his technique or just to tinker with things?

‘He needs to do the simple things better. So can he calm things down with his movements and everything? We’ve been talking him through that. It’s tough in competition.

‘Everyone says do you work with them? Yes you do, but you can’t pick away at people’s brains too much walking into Test matches. Sometimes they have to come out and then you can reset a little bit.

‘When players get a little bit of success they then think my way is the right way. And there’s a balance to it. You can see certain things. I said to him, ‘The best bowlers in the world are going to analyse your technique and the right-hand column is going to tell you whether you’re getting it right or not’.

‘Now we’ve seen he’s got a good fighting character, so I know that. But at the same time you need a technique and temperament at the highest level.’